When last we saw Étienne Léopold Trouvelot, the gifted astronomical observer, artist and accidental destroyer of worlds via his injudicious introduction of the gypsy moth to the US, the 15 impeccably detailed astronomy drawings he chose for publication in 1881 using the new color printing technology of chromolithography had just been digitized by the New York Public Library. Now one of the rare surviving complete sets of Trouvelot chromolithographs is going on public display at The Huntington Library, Art Collections, and Botanical Gardens in San Marino, California. The exhibition, Radiant Beauty: E.L. Trouvelot’s Astronomical Drawings, opens April 28th of this year and runs through July 30th in The Huntington Library’s West Hall.

The set of 15 chromolithographs was the crowning achievement of Trouvelot’s career, said curator Krystle Satrum, assistant curator of the Jay T. Last Collection at The Huntington. “He was both an extraordinarily talented artist and a scientist, producing more than 7,000 astronomical illustrations and some 50 scientific articles during his working life.”

In vivid color and meticulous detail,

the works depict a range of astronomical phenomena. “The high quality of both the artwork and the scientific observation demonstrates his uncanny capacity to combine art and science in such a way as to make substantial contributions to both fields,” Satrum said.

The pas-de-deux between art and science is still producing magic today. Images from high-powered telescope cameras, satellites and probes that have so mesmerized the public since the Hubble first started working right don’t look anything like the swirling marvels of color when they are transmitted. They’re black and white, infrared, ultra-violet, etc., thick with data but not so much visual impact for our limited optic range. It’s the artists who translate that data into something approximating what we’d see if we could.

Trouvelot was a master of converting telescopic information into beautifully colored artworks long before the Hubble was a twinkle in NASA’s eye. The chromolithographs wound up being a bit of a last hurrah for the field. By the turn of the century, drawings were rapidly being superseded by photographs as cameras became more powerful and precise. Of the estimated 300 luxury portfolios published by Charles Scribner’s Sons in 1882, only a few still survive intact today. Most of them were bought by institutions and observatories as references for their astronomers, but once photography starting edging out the old school artistic rendering, the Trouvelot chromolithographs were sold off or thrown away.

The Huntington’s set was acquired by physicist and Silicon Valley co-founder Jay T. Last as part of his extensive collection of graphic arts, particularly lithographs, from the 19th and early 20th century. He donated more than 200,000 printed works from more than 500 companies, high-end astronomical chromolithograph sets to orange crate labels to the museum. Highlights from the Jay T. Last of Graphic Arts and Social History can be browsed on The Huntington’s website.

Speaking of online collections of historic lithographs, the NYPL didn’t have high resolution versions of Trouvelot’s drawings in the online gallery when it debuted, much to my chagrin, but they are available now for download in tiff format. Click “All download options” and select “High Res tiff” from the list to get them. They’re not as gloriously huge as The Huntington Library’s images which they so kindly allowed me to use in this here post. They are in great condition, however, and I got a kick out of comparing the two sets. 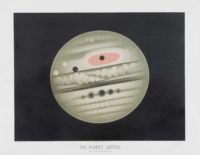 One thought on “Trouvelot’s astronomical drawings to go on display”