An oil on panel portrait of King Henry VIII in the Bath’s Victoria Art Gallery long believed to be a 19th century reproduction has been found to be a genuine Tudor-era artwork. It was donated to the Bath & North East Somerset Council in the 1800s and was thought to be a copy of a copy. This particular portrait of Henry was originally a mural in his apartment at Whitehall Palace by the king’s favorite court painter Hans Holbein, but the original is long gone. It was destroyed in the fire that burned down the palace in 1698.

The Whitehall mural was copied by many artists, and once the mural was lost, the copies were copied. The Victoria Art Gallery’s version is of higher quality than most of the other later copies, however, so when the painting had to be sent to specialists for conservation, the council had the wood panels dated using dendrochronology. Counting tree rings and matching their patterns doesn’t always work for thin panels (as opposed to logs or thick timbers), but researchers got lucky this time. The portrait was painted between 1537 and 1557, which makes it one the earliest surviving portraits of Henry VIII, who died exactly halfway through the estimated date range.

The dating of the painting was paid for by the Friends of the Victoria Art Gallery. The Chairman, Michael Rowe, said: “The Friends of the Gallery are committed to supporting original research into the gallery collections and were delighted to fund the dendrochronology. We look forward to further research into the origins of this important picture.”

Councillor Paul Myers, cabinet member for Economic and Community Regeneration, said: “This is one of the oldest and best pictures of Henry VIII in the world, and we are very fortunate to have it in the council’s public art collection. The painting will soon be back on display at the Victoria Art Gallery, where visitors will be able to see it for free in the Upper Gallery.” 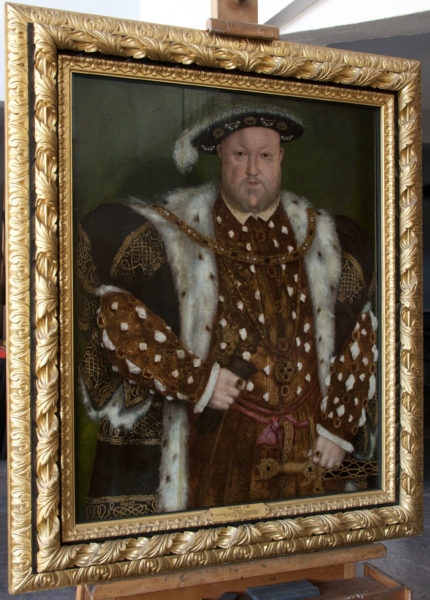 3 thoughts on “Portrait of Henry VIII is truly Tudor”