A work in the Royal Museum of Fine Arts Antwerp (KMSKA) long believed to be an 18th century copy of Jan Steen’s The Mocking of Samson has been identified as an original painting by the Dutch Golden Age master himself. The KMSKA, currently closed for renovations, sent the painting to the Mauritshuis in The Hague as part of a long-time collaboration that has born such extraordinary fruit that a new Jan Steen has now been added to the museum’s permanent collection.

The painting caught the eye of Mauritshuis conservation experts when they were considering which works were good candidates for inclusion in the upcoming exhibition dedicated to Steen’s Histories, i.e., his depictions of scenes from Biblical and Classical mythology.

Emilie Gordenker, director of the Mauritshuis: “During the process of selecting the loans for the Jan Steen’s Histories exhibition, our curator Ariane van Suchtelen had a strong suspicion that The Mocking of Samson was not a copy, but had actually been painted by Jan Steen himself.

After further research, restoration and technical examination we have come to the conclusion that not only is this painting by the master himself, but that it is still in excellent condition. It’s as if the canvas is fresh out of Jan Steen’s studio – thrilling!”

Conservators were surprised to find when looking at the back on the canvas that unlike most 17th century paintings, Samson had never been relined. The practice of gluing a second canvas to the back of the first to support it was widespread, but this painting was the original canvas alone still on its original strainer (fixed wooden supports that, unlike stretchers, cannot be adjusted at the corners to tighten the frame when the canvas slackens) attached with its original nails, no less.

Fragmentary evidence added more authentic detail. There are additional holes at the canvas edge where string had once been threaded through to connect the canvas to the frame when Steen was creating the painting. Some fragments of that string are still in those holes.

Then, when the yellowed and cracked varnish layer on top of the painting was removed during conservation, the paint itself was found to be in superior condition, with brilliant colors, clear brushstrokes and negligible wear and tear. It’s very rare for a 17th century painting to make it to the 21st in such exceptionally good condition. Perhaps its years of misidentification was salutary to its long-term survival, as nobody bothered trying to restore it with practices that would later prove destructive. 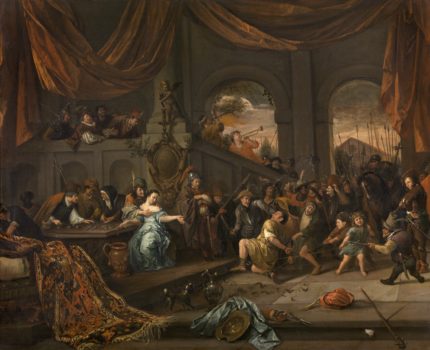 The Mauritshuis has been working assiduously with Shell researchers for six years in an attempt to pin down the chronology of Steen’s oeuvre. Very few of his works have firm dates — about 10% of his surviving paintings — so museum experts have teamed up with experts at the Shell Technology Centre in Amsterdam to examine as many Steens as possible. They use a scanning electron microscope with energy dispersing X-rays to examine the pigments and determine the chemical makeup of the paint and the concentrations of each element.

One of the pigments, a bright green earth color that wasn’t used much in the 17th century, appears unusually frequently in Jan Steen’s late period shortly before his death when he had returned to his hometown of Leiden. As luck would have it, The Mocking of Samson also contains the tell-tale green earth pigment. It was used in the stash of the standard-bearer on the right. That dates the work to the 1670s.

The newly rediscovered painting, now fully restored and ready for primetime, will join its thematic brethren in Jan Steen’s Histories when it opens at the Mauritshuis on February 15th. Once some of his most popular and expensive paintings, Steen’s histories fell out of fashion in latter part of the 18th century. His humorous, playful, juicy depictions of the great soap opera-like dramas of Samson and Delilah, Lot

and his daughters and the worshipping of the Golden Calf, so enjoyed by 17th century patrons, were held to be in poor taste a century later, and were somewhat ostracized by collectors and institutions. Even the Mauritshuis only added one of Steen’s history paintings to its fabled collection in 2011. That’s a long time for a category of works by such an important artist to be on the outside, lurid little faces pressed against the glass. The museum is making up for lost time by putting on this exhibition with the work in its collection, Moses and Pharaoh’s Crown, and loans from other collections around the world. 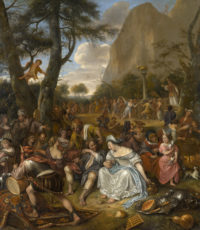