An antiques dealer has discovered the yearly income records for the Duchy of Cornwall under King Richard III in a box of 1930s royal memorabilia he acquired as a single lot in an estate sale. The compotus rolls, the accounts of the monarchical estates in the Duchy of Cornwall under King Richard III (and for a brief window nominally under his nephew Edward V who was never crowned and whom Richard deposed two months after his ascension), were drawn up for Richard after he took the throne and covered the period from Michaelmas (September 29) 1482 until Michaelmas 1483.

Written in Latin on 11 thin parchment membranes by a scribe with an elegant hand for calligraphy initials, the rolls record that profits were handsome in the Duchy of Cornwall in 1483. The annual income from the Cornish manors, burghs, courts and tin mines, plus a handful of Devon manors totalled around £500. A labourer made about £2 a year.

The accounts show detailed showing totals for rents, sales and court receipts for manors within the Duchy and in Devon.

Also detailed are the names of bailiffs who supervised work on the each manor and would act as a link between the serfs and their feudal lord. The amounts raised from each manorial lord amounted to between £12 and £30 per annum. 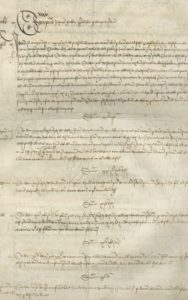 Overall, the Duchy of Cornwall’s seigneurial records have survived unusually well, retained for generations by manorial archives, county archives and by duchy management. Today almost all of the accounts between 1300 and 1500 and beyond can be found in the county Public Records and the Duchy of Cornwall Office. This scroll is one of only a handful to survive in private hands.

The owner didn’t know exactly what was now in his private hands until a medieval manuscripts expert from Bonhams examined the parchment. He has now put it up for auction in Bonhams upcoming Fine Books and Manuscripts auction on March 21st in London. The pre-sale estimate is $5,500 – 8,300.

Peter Hammond, president of the Richard III society, said: “It is a very important record and we don’t know how many of these 15th century documents still exist.

“It gives us a handle on the kind of income that was coming in to keep the country running. The bureaucracy was alive and well in the 15th century – they kept amazing records.”

Historian hope the document will remain in Britain following the sale and be made available for public research.

Mr Hammond said: “It would be good if it was bought by the Cornwall Record office or the National Archives and it would be great if people were then able to see it.”