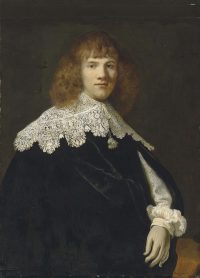 A previously unknown painting by Rembrandt van Rijn has been identified, the first “new” work by the Dutch Golden Age master to appear since 1974. The hidden gem was spotted by Jan Six, an Amsterdam art dealer, art historian and specialist in Dutch old masters, at a Christie’s auction in 2016. Christie’s attributed the portrait “of a gentleman, half-length, in a black velvet cloak and white lace collar and cuffs” to the circle of Rembrandt van Rijn, dating it very generally to his lifetime. The painting itself is neither signed nor dated. The provenance couldn’t shed much light on the painting’s origin as the ownership record starts in England a century later at the earliest.

Six knew from the moment he laid eyes on the work in the Christie’s showroom that it was by Rembrandt, not someone in his circle. The direct gaze of the sitter making eye contact with the viewer was a rare approach in 17th portraiture, but they’re typical of Rembrandt’s portraits, including self-portraits. Then there was the matter of the collar. Six recognized it as a style that was in fashion for a brief period in 1633. Rembrandt had moved to Amsterdam from Leiden in late 1631 to begin his career as a portraitist. He quickly made a name for himself as a gifted portrait painter, but in 1633 there was no circle of Rembrandt yet.

Jan Six and an unnamed investor bought the painting at the Old Masters Day Sale in London on December 9th, 2016, for 137,000 pounds ($185,000), a sum nine times higher than the pre-sale estimate but chump change compared to its market value as a portrait painted by Rembrandt. Confirming attribution of an unsigned painting that is unknown in the literature is no easy task, however.

[Six] spent 18 months using X-ray techniques and analysis of paint samples to prove he had in fact bought a real Rembrandt.

The 39-year-old art dealer eventually won the backing of more than a dozen Rembrandt experts, including [Ernst van de Wetering,] the former leader of the Rembrandt Research Project, who spent a year verifying its authenticity.

“Seeing all these experts agreeing to what you’ve found is truly special. With the support of this vast body of knowledge, anybody contesting the painting would clearly represent a minority,” Six said.

The painting has been cut out of a larger piece. Researchers believe the dapper gentleman was part of a double portrait, likely with his wife as the other subject. That means there could be an unknown lady painted by Rembrandt out there for someone to find.

The cleaned and conserved portrait went on display at the Hermitage Amsterdam on Wednesday, May 16th, and will remain there until Friday, June 15th. Jan Six plans to seek a buyer for it. Here’s hoping it’s a museum.