Seven hundred years after it was built, Westminster Abbey’s eastern triforium has opened to the public for the first time. Soaring 52 feet above the Abbey floor, the gallery provides a one-of-a-kind view of the cruciform architecture of nave and apse, the Great West Door, the shrine of Edward the Confessor, and my personal obsession, the Cosmati Pavement in front of the Grand Altar whose intricate geometry is best appreciated from above.

It’s not just a great viewing perch. The triforium has been transformed into the Queen’s Diamond Jubilee Galleries, a fitting exhibition space for 300 objects from the Abbey’s collection. It is divided into four sections with their own themes: construction of the Abbey, worship and daily life, relationship with the monarchy and the church’s pivotal role in preserving the national memory.

Artifacts on display include the Litlyngton Missal, an illuminated Latin manuscript that is one of the largest medieval manuscripts known, the Liber Regalis, the 14th century guide to coronations and royal funerals that remains to this day the basis of those ceremonies, the Westminster Retable, the oldest altarpiece in England that is believed to have originally adorned the Westminster Abbey of Henry III’s day. There is also a remarkable collection of royal funeral effigies, 21 of them dating from the 14th through the 17th centuries.

Among them are Mary I and Edward III (who had eyebrows made of dog hair, sadly missing today) and Catherine de Valois, wife of Henry V, slender in her flowing red robe. These would have been placed on the coffin for the funeral procession, bewigged, fully dressed in robes of state and carrying the orb and sceptre. For this reason, they are jointed, like life-size dolls.

Then there are the personal details: for example, the painted head of Henry VII, probably by the Florentine sculptor Pietro Torrigiano, may be a death mask because his mouth is slightly twisted – he died from a stroke. Just nearby is the long, tightly-laced corset worn by the effigy of his grand-daughter Elizabeth I, which would have been topped off with a ruff and a crown. 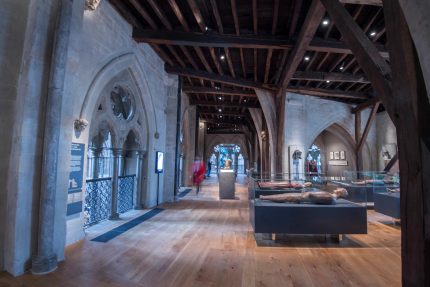 On Friday, June 8th, the Queen and Prince of Wales officially opened the new galleries and came face-to-effigy with their predecessors. They opened to the public on Monday. The space is small and the number of visitors allowed is limited, so tickets (which must be bought in addition to the general Abbey admission ticket) are timed in 15-minute intervals.