An 18th century imperial Chinese vase carried by its owner to Sotheby’s Paris office in a shoebox sold for €16,182,800 ($25.1 million) at an auction on Tuesday. That’s more than 20 times the pre-sale estimate ($775,000 to $1.1 million) and is the highest price ever paid for a single object at Sotheby’s Paris and sets a new record for Chinese porcelain sold

The sellers inherited the vase from their grandparents who had inherited it from an uncle. An inventory of the uncle’s apartment after his death in 1947 records the vase and several other Chinese pieces, including a bronze mirror in a carved lacquer box that the sellers also consigned to Sotheby’s for sale. The family treasure was kept in the attic for years until the sellers decided to have some of the old stuff appraised.

“This person [the seller] took the train, then the metro and walked on foot through the doors of Sotheby’s and into my office with the vase in a shoebox protected by newspaper,” Sotheby’s Asian arts expert Olivier Valmier said.

“When she put the box on my desk and we opened it we were all stunned by the beauty of the piece.” 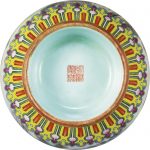 A red stamp on the bottom of the vase is the seal of the Qianlong Emperor (r. 1736 to 1796), avid collector of Chinese traditional and Western art who had both Chinese and Western artists at his court. The fusion of styles produced innovative designs, colors and perspective particular to his reign.

The vase is a unique artwork, the only known example of its kind. It is a Famille-Rose or

yangcai porcelain made in the imperial workshops of Jingdezhen . The whole category is extremely rare, found almost exclusively in museums, and the decoration of this one has no comparables. Around the center of the vase is a beautiful hilly landscape dotted with pine trees, a waterfall and incredibly detailed deer and cranes. Around the neck and bottom are brocade-like borders of floral and pearl designs with gold accents. This kind of object was not part of the workshop’s regular production lines. They were either one-offs or part of a pair, the absolute cream of the artist crop.

The sellers knew it was of some value, but had no idea that it was the antiquities version of a winning lottery ticket. Nor did they know that it was as old as it was or that it bore the imprimatur of a Quin dynasty emperor.