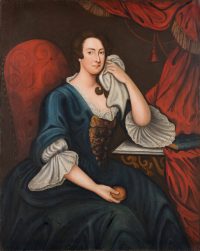 The descendants of Joyce Armistead Booth have donated an extremely rare surviving portrait of their ancestor painted by 18th century artist William Dering to the Colonial Williamsburg Foundation. Only six of Dering’s portraits are known to have survived — including one of Joyce’s son George — and with the latest donation the Colonial Willamsburg foundation is now the proud owner of five of the six.

Only one of the portraits attributed to William Dering is signed. Experts use it as the standard to determine attribution of other works that crop up. The painting of Joyce Armistead Booth has been in the family since it was painted. It is in excellent condition and is still in its original frame. This is an inestimable resource for art historical research into Dering’s oeuvre.

“Executed in saturated, well-preserved reds, blues, and golds, and measuring more than four feet in height, this likeness of Joyce Armistead Booth is visually arresting,” said Ronald L. Hurst, the foundation’s Carlisle H. Humelsine chief curator and vice president for collections, conservation and museums. “The portrait commands the viewer’s attention, and in so doing, provides a window into the goals and aspirations of early Virginia’s planter aristocracy.”

This Dering portrait is significant to ongoing research that Colonial Williamsburg’s experts are undertaking. Laura Barry, Juli Grainger curator of paintings, drawings and sculpture, and Shelley Svoboda, senior conservator of paintings, are at work on a comprehensive study of the artist and his work from both historical and technical perspectives. The portrait of Joyce Armistead Booth, especially due to its pristine condition, informs this research and will help the experts to better understand the nuances in Dering’s other canvases.

William Dering was a Williamsburg dancing master and portrait painter who navigated the upper echelons of Virginia society in the first half of the 18th century. The first record of him in the American colonies is in an advertisement for his dancing school in the Pennsylvania Gazette in 1735. In an notice in the same periodical a year later, he was offering a significantly wider array of teaching services, to wit “Reading, Writing, Dancing, Plain Work, Marking, Embroidery, and several other Works: where Likewise young Ladies and Gentlemen may be instructed in the French.”

He and his wife Sarah moved to Virginia and by November of 1737 he was in Williamsburg. An advertisement in the Virginia Gazette of November 25th announced that Dering had “opened his School at the College, where all Gentlemen’s Sons may be taught Dancing, according to the newest French Manner….” He appealed solely to the sons of gentlemen because his classes were held at the College of William of Mary which was then men-only.

What we know of Dering’s social life is the result of his friendship with the socially prominent statesman, planter and founder of Richmond, Virginia, Colonel William Byrd who kept extensive diaries recording his daily life. Dering was a regular visitor to his estate, Westover Plantation. One night on June 6th, 1740, Byrd noted Dering had joined him for dinner of bacon and greens followed by talking, a game of bowls and a walk. They shared many such pleasant evenings. Dering played the French horn during one of them.

Legal records paint a less carefree picture. Dering struggled to pay off multiple mortgages on his house next to the Governor’s Mansion on the Palace Green, a rather high-end address for a dancing teacher, and he was involved in other lawsuits with creditors. It seems he lived consistently beyond his means and his home had to be auctioned after his death in early 1751. It is still standing today and is preserved and administrated by the Colonial Williamsburg Foundation.