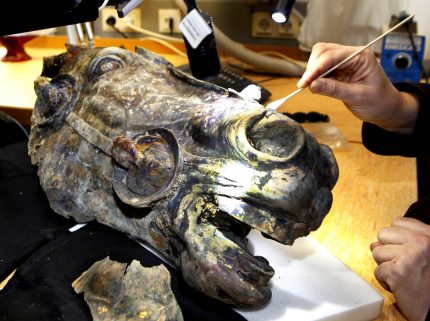 Way back in the short-n-sweet days of this here blog, almost a decade ago now, I reported on the discovery in Germany of an exceptionally well-preserved bronze horse head from a Roman-era equestrian statue. Archaeologists unearthed the life-sized equine head made of gilded bronze and a single human foot from the same statue near Waldgirmes in the central German state of Hesse on August 12th, 2009.

Waldgirmes is not mentioned in the historical record, but there was a Roman town there. The remains of a forum are the oldest known stone building foundation in Germany. Roman coins found at the site bear the profile of Publius Quinctilius Varus, the first governor appointed of the newly-official Roman province of Germania in 7 A.D. and notorious loser of the Battle of the Teutoburg Forest two years later.

The style and quality of the horse head date to the earliest period in the area’s Roman history. The horse’s bridle is decorated with reliefs of Mars, god of war, and Victoria, personification of Victory. It was likely part of an equestrian statue of the Emperor Augustus which stood in the settlement since its foundation in around 4 or 5 A.D. and was destroyed by the victorious Germanic tribes after the Battle of Teutoburg Forest. They dismembered the symbol of imperial domination and tossed the head and foot into a well. Very much contrary to their intent, the waterlogged environment preserved the broken pieces in exceptional condition.

At the time of the discovery, the state of Hesse paid the landowner of the find site 48,000 euros in recompense for the head and foot in accordance with the regional cultural patrimony laws, but the farmer was not satisfied that the accounting was accurate. Comments like this one from Eva Kuehne-Hoermann, Hesse’s state minister for science, at the Frankfurt unveiling of the gilded horse head: “This bronze sculpture counts among the best pieces to have ever been found from the area of the former Roman empire. Nowhere else is there a finding of this form or quality.” might have tipped him off.

A new ruling from a regional court backs the farmer’s position.

The Limburg regional court said Friday that, according to state law at the time, the farmer was eligible to half the value of the head, which an expert estimated at around 1.6 million euros. He would also be entitled to interest.

That makes for a grand total of 773,000 euros (nearly $904,000) owed to the landowner by the state government, plus any interest that has accrued in the nine years since the discovery. The ruling can be appealed so it’s not necessarily the final determination.