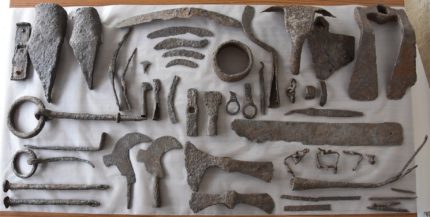 A set of 1,500-year-old agricultural and carpentry tools have been discovered in the ancient Green city of Alexandria Troas on the Aegean coast of northwestern Turkey. The cache was discovered by accident by a farmer. He found earthenware pithos, a massive storage vessel, dating to the 5th-6th century A.D., in a field he owns that includes part of the ancient city wall.

A pithos alone would have been an exciting artifact. It proved to be geometrically more exciting when it was found to contain iron and bronze tools used for agriculture, carpentry and the making of other tools. The objects include sickles, soil scrapers, weed cutters, soil tampers, plows, long nails, and hand tools like saws, grinders, drills and spatula scrapers. The tools date to the late Roman, early Byzantine era, the 5th century A.D., and were stored in the pithos for centuries.

Founded around 306 B.C. as Antigonia Troas, the city was renamed after Alexander of Macedon in 301 B.C. and rose to become a prosperous port town under the Roman Republic and Empire. It had a population of around 100,000 at its peak and was a major port for trade and transportation between Asia Minor and Europe. Paul of Tarsus used it as a departure and arrival point on his travels to Europe and back. Its importance faded under the Byzantine Empire as the harbour silted up, but it was significant enough to remain the see of a bishopric until its abandonment some time in the Middle Ages.

[Ankara University archaeology professor and excavation leader Dr. Erhan] Oztepe said it is the most interesting finding of 2018. “Iron and Bronze [Age] agricultural and carpentry tools show us the economy of the ancient city and farming activities in the Alexandria Troas and nearby regions of the Early Byzantine period,” he said.

Kemal Dokuz, the head of Provincial Directorate of Culture and Tourism, highlighted the importance of the ancient site for tourism. “St. Paul stayed in this city and this place is as important as Ephesus to the Christian world. The Ministry of Culture and Tourism has spent $1 million [$170,165] on Alexandria Troas excavations within the last 5 years,” he added.