Archaeologists documenting graffiti carved by Roman soldiers near Hadrian’s Wall in the 3rd century uncovered a large phallus concealed for centuries behind vegetation. Soldiers left their distinctive marks in 207 A.D. when cutting stone from the quarry in Cumbria to supply material for major repairs and strengthening of Hadrian’s Wall ordered by the emperor Septimius Severus. He was in Britain launching an invasion of Scotland at the time, so refortifying the northern border was a top priority for him.

The site is known as the Written Rock of Gelt and inscriptions were first discovered there in the 18th century. It became a popular attraction and a path was built to allow people to view the ancient graffiti on the 30-foot rock face. The path collapsed in the 1980s and was not rebuilt, making the inscriptions largely inaccessible. Overgrowth of plant matter and erosion of the soft sandstone has obscured the graffiti and steadily worn away at the surface.

As well-known as the site it is, because of the difficulty in accessing it the inscriptions have 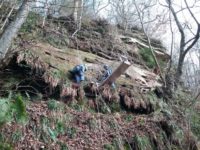 never been documented to modern archaeological standards. A team from Newcastle University is in a race against time to fully explore and record them all before they are gone forever. They have found more than they expected.

It was thought ‘The Written Rock of Gelt’ included a group of nine Roman inscriptions, of which only six were legible, however more are being discovered, some are new and others were previously thought to be lost. Four new written and figurative inscriptions were discovered while preparations for this new project were being made, including a relief sculpture of a Phallus – a Roman ‘good luck’ symbol.

The site is one of only a handful of Roman quarries in England to feature these kinds of inscriptions. The information recorded is of particular importance because it gives the names of men and in some instances, their rank and military units. One datable inscription ‘APRO ET MAXIMO CONSVLIBVS OFICINA MERCATI’ referring to the consulate of Aper and Maximus, offers proof of rebuilding and repair work to the Roman frontier in the early third century AD.

The inscriptions also identify the legions deployed to the quarry. One reads C IVL PECVLIARIS VEXILATIO LEG XX VV, which translates to “The century of Julius Peculiaris; detachment of the Twentieth Legion Valeria Victrix.” Another reads “VEX LI EG II AVG OF APR SVB AGRICOLA OPTIONE,” meaning “a detachment of the Second Legion Augusta, working April under Agricola, Optione [the NCO designated by the centurion to command the detachment]”. There’s a smiley face next to that inscription, possibly a cheeky nod at Agricola.

There’s another image, a profile head and shoulders that may have been been a more elaborate caricature of a commanding officer. And because the classics are classics for a reason, one carving notes “Publius Aelius Hadrianus est hic,” the Roman legionary version of “Kilroy was here.”

Archaeologists are collaborating with climbers to abseil down the rock face. Hoisted on ropes and pulleys, the team is cleaning the surface first and then recording it using structure-from-motion (SfM) photogrammetry. The high-resolution images will then be used to create a detailed 3D record of the incriptions. The 3D models will be made available to the public later this year on Historic England’s Sketchfab page.