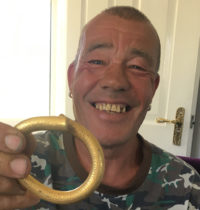 A metal detectorist has discovered a unique Bronze Age gold ring in West Cumbria. Billy Vaughan was scanning a field near his home of Whitehaven when he unearthed the ring. A novice metal detector who has only been at it for six months, Vaughan had already scanned this field dozens of times and only found a few silver coins, buttons and small odds-and-ends. This time the alert was strong, so he dug down five inches below the surface where he found the gold.

He had no idea it even was gold. At first he thought the circular piece with a slightly flattened side was a climber’s carabiner or maybe a tractor coupling. When he took a second look, he realized that was no carabiner. He sent a photo of his find to a metal detecting enthusiast friend with more experience and the response from “Spud” was apparently unprintable. Spud encouraged him to take it to a local jeweler who confirmed that it was indeed gold, 22-carat gold, in fact, and a solid 310 grams (11 ounces) of it. 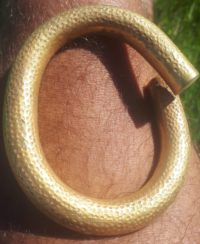 The ring is tubular, intact and bent into a loop so its terminals overlap. It is covered in decorative dimples all over the surface with only a thin section along the inside of the ring left smooth. Vaughan reported his discovery to the local Finds Liason Officer Lydia Prosser.

“I personally haven’t seen anything like this in my years and I have worked across Yorkshire, Lancashire and Cumbria.  At first, there didn’t seem to be any parallel with the unique decorations and it presented a lot of questions.

But experts have started looking into it and Neil Wilkins, who is the Curator of the Bronze Age artefacts at the British Museum, came across a similar arm ring of Irish origin.  So the latest thinking is it was brought over, or traded, in Ireland.  That may place it as late Bronze Age, around 1800BC.”

The only other Bronze Age gold ring discovered in Cumbria listed in the Portable Antiquities Scheme database is a broken pennanular ring with a smooth surface that was made by rolling a sheet of gold into a tube. It is .67 inches long and weighs just 1.8 grams. That’s less than a half a gram more than the weight of the 1/4 teaspoon of salt I put in a two-egg omelette, just to give you an idea. It was dated to the middle Bronze Age, about 1300-1150 B.C.

The only Bronze Age decorated gold object discovered in Cumbria recorded in the PAS database is the terminal of a lunula (a large collar necklace shaped like a crescent moon). It is decorated with engraved concentric rectangles. The outermost rectangle was enhanced with small square dents that were punched in along the incised line giving it a dashed and dotted effect. It dates to around 2200-1700 B.C. and is believed to have been made in Scotland or Northern England in imitation of Irish originals.

The ring will now be studied by a experts who will advise a coroner’s court whether it qualifies as treasure under the Treasure Act (it does twice over as it is more than 300 years old and is more than 10% precious metal content). A valuation committee will determine its market value — the jeweler assessed its value in gold weight alone at £11,000 ($13,500) — and a local museum will be offered the chance to acquire the artifact for the determined amount which will then be awarded 50/50 to the finder and landowner. Whitehaven’s Beacon Museum would love to have it if they can raise the funds.