For thousands of years during the Bronze and Iron Ages, carved and painted ostrich eggs were traded around the Mediterranean, objects so highly prized by the elite of the region that they were buried with them. Up until now the decorative eggs have been classified by scholars according to style and motif, but a new study enlists state-of-the-art technology to determine where the eggs came from, the trade routes they took and the techniques used in their manufacture.

Eggs have been symbols of rebirth and renewal marking the transition from winter to spring in many religious and cultural traditions ancient and modern. Egg-shaped stones with a flattened base were used by Phoenicians as cippi (altar pedestals) or placed on top of pillar-style cippi, and ovoid sacred stones known as betyls have a very ancient lineage going back to the Bronze Age cultic traditions of prehistoric Egypt and Mesopotamia. Ostrich eggs have been found in funerary contexts dating as far back as the 2nd millennium B.C. in Cyprus and Syria and extending to Greece, Italy and Spain where there are no native ostriches.

For this study, researchers examined five whole ostrich eggs from the Etruscan Isis Tomb at Vulci (625-550 B.C.), now in the collection of the British Museum. This tomb belonged to people of very high rank, likely a wealthy family, who were buried with rich grave goods including the bronze bust of a goddess originally believed to represent Isis (now thought to be a local deity), gold jewelry, bronze vessels, Greek pottery and Egyptian scarabs. The combination of high-end local and imported objects is typical of the Etruscan Orientalizing Period (720-575 B.C.), characterized by intense contact between the Etruscans, Phoenicians, Egyptians and Greeks.

Four of the five eggs were decorated with both carving and paint. One was painted without carvings. The decorative motifs include sphinxes, wild animals, plants, geometric designs, warriors and chariots. Holes were drilled in the thick shells to drain the contents, then the empty eggs decorated. They were originally mounted with metal fixtures — spouts, stands — to convert the eggs into vessels.

In the study, published in the journal Antiquity, the researchers describe for the first time the surprisingly complex system behind ostrich egg production. This includes evidence about where the ostrich eggs were sourced, if the ostriches were captive or wild, and how the manufacture methods can be related to techniques and materials used by artisans in specific areas.

“The entire system of decorated ostrich egg production was much more complicated than we had imagined! We also found evidence to suggest the ancient world was much more interconnected than previously thought,” said Dr Hodos, Reader in Mediterranean Archaeology in Bristol’s School of Arts.

“Mediterranean ostriches were indigenous to the eastern Mediterranean and North Africa. Using a variety of isotopic indicators, we were able to distinguish eggs laid in different climatic zones (cooler, wetter and hotter, drier).  What was most surprising to us was that eggs from both zones were found at sites in the other zone, suggestive of more extensive trade routes.”

Ostriches are known to have been hunted and killed as well as captured. Assyrian texts document the practice and point to the birds having been kept for breeding, perhaps to stock exotic gardens, or as sources of feathers, leather and giant eggs.

Dr Hodos and colleagues believe eggs were taken from wild birds’ nests despite evidence of ostriches being kept in captivity during this period. This was no ordinary egg-hunt – ostriches can be extremely dangerous so there was a tremendous risk involved in taking eggs from wild birds.

“We also found eggs require time to dry before the shell can be carved and therefore require safe storage. This has economic implications, since storage necessitates a long-term investment and this, combined with the risk involved, would add to an egg’s luxury value,” said Dr Hodos. 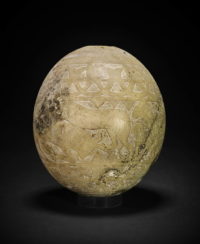 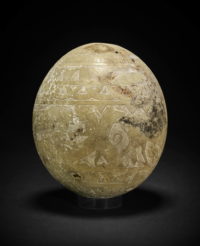