Like many cities in lockdown, Jersey City, New Jersey, has been taking advantage of the closure of public facilities to do necessary repairs and upgrades that under normal circumstances would be disruptive to residents.  One of those tasks was the removal of sad 60s vinyl flooring from a corridor in the city hall. Mayor Steven Fulop tweeted Sunday that they found a happy surprise underneath: the glamorous original tile floor from 1896.

Jersey City’s City Hall was designed by Lewis H. Broome, city architect from 1880 until 1884 and future state architect of New Jersey. He entered a contest for the commission and his striking neoclassical design won. The cornerstone was laid on May 26th, 1894, and the mayor moved in to the new city hall in January 1896.

Today the grand façade with its granite and marble veneers, marble columns and pediments with allegorical figures in classical garb wielding shovels and pitchforks, is a popular backdrop for many a wedding photo and productions of Shakespeare’s Julius Caesar, but when it first debuted the building was not received with universal acclaim, to put it mildly. Architectural Record absolutely savaged it in its “Architectural Aberra­tions” feature, an unsigned takedown of buildings the

reviewer (New York Times editorial writer and architecture critic Montgomery Schuyler) deemed deficient in design. City Hall hadn’t even opened yet when it was brutalized in Architectural Record‘s July-September 1895 issue. A whole city block had been demolished to make room for the new building with a large landscaped park like the one in front of New York’s City Hall. This was its fundamental failing, according to the critique, that because Broome had attempted to “simulate a public building more solid and costly than his client can afford, with an array of cheap finery, the resulting edifice fairly reeks of vulgarity.”

[Broome’s] principal front has things enough for a front three times as long. At the centre, to begin with, there is a porch with two columns on each side, with composite capitals, inclosing a Romanesque entrance-arch with two nook-shafts on each side. Behind this portico rises a tower with three openings, which are two too many for its width, squeezed into its surface and extended through two stories with a most preposterous treatment of the interpolated transom. In this tower we have the “note” of the whole building. This characteristic is the squeezed and pinched appearance that comes from the designer’s effort to get more things in a given space than it will accommodate, and all that it can be made to hold by extreme crowding. […]

It remains to be added that the skyline is as tormented as the designer knew how to make it, mainly with cupolas over the towers bearing minarets, and entirely incongruous with any of the things below them, as many of these things are with each other. The culminating atrocity is that all this is cheap and imitative finery. Above and including the cornice all this ornament, excepting the urns at the corners in cast iron, is in sheet metal, the meanness and vulgarity of which are rather exposed than enhanced in the present state of the work by the fact that the pediments are faced with paper held in place with laths.

If one encountered this disreputable structure in Oshkosh he would say, how Oshkoshian ; in Peoria, how Peorian — it is so rude and raw a travesty of the architecture of civilization. As a matter of fact, it is in one of the oldest settlements of the United States and within a mile or less of it is a respectable dwelling erected in 1666. This is not the brutality of a blundering beginning, but the hopelessness of a completed degeneration. The building which expresses the municipal aspirations and standards of Jersey City, and which would disgrace a municipality of South Dakota by its crudity and vulgarity, serves to show how exceedingly thin is our veneer of “art.”

Schuyler may have had a point beyond mere gleeful acidity on the “cheap and imitative finery” issue. In 1897, a year after City Hall opened, Broome was indicted for a misdemeanor in office, specifically “giving a false certificate as to the materials used in the building.” New Jersey’s contention was that Broome’s commission by the state to build a city hall made him the

holder of a state office and therefore he was guilty of official misconduct. Broome’s lawyers argued he was a contractor, not an office-holder and therefore he was only bound by the terms of his contract with the commissioners. The New Jersey Supreme Court agreed and quashed the indictment. I couldn’t find any details about what the material deficiencies may have been and the court never addressed the question because they were just deciding on whether the charge of official malfeasance was valid.

If the cupolas are anything to go by, at least some of the quality concerns might have been valid. They were removed in 1955 after they were found to be structurally unsound. Even so, the rest of the building survived a major fire in 1979 and was extensively rebuilt over the next couple of decades. All of that work, a whole ass fire, and there are still hidden treasures to be found. 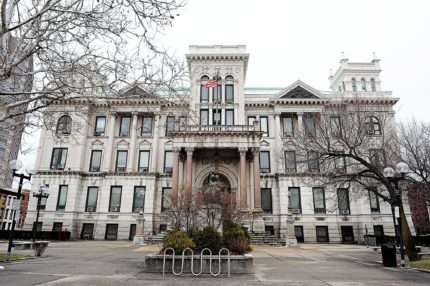