Archaeologists have unearthed the remains of more than 100 children in a late 16th, early 17th century graveyard in the village of Jeżowe, southeastern Poland. Human remains were first discovered by road workers and archaeologists called in to excavate. They have found the skeletons of 115 individuals, most of them, around 70-80%, are of children.

Many of the burials unearthed thus far can be precisely dated despite the lack of grave markers because the deceased were buried with coins in the mouths. Most of the coins were minted during the reign of Sigismund III Vasa who ruled Poland from 1587 to 1632. There were also coins from John II Casimir Vasa (r. 1648-1668).

It’s the “pay the ferryman” aka Charon’s obol tradition, a funerary practice common in ancient Greece and Rome. Coins were placed in the grave so that the souls of the dead would have cash to pay Charon to ferry them across the river Styx to the Underworld. The practice was not uniform — the number, placement and type of coins differed from place to place and culture to culture — but it was widespread in the Greco-Roman world and the Near East. It was adopted by local peoples in late antiquity and continued into the early Christian era. There were still instances of it as recently as the 20th century. While the ritual was interpreted differently depending on time and location, there are clusters of finds in which the practice was consistent between burials. The coin being placed in the mouth is more frequently seen in Christian burials from Merovingian France to 19th century Britain.

The burials in Poland contained no other grave goods, nor any evidence of hardware like coffin nails or fittings. This indicates the cemetery was used by people of modest means.

[Archaeologist Katarzyna] Oleszek said, “We know from sources that during a visit of the bishops of Kraków here in Jeżowe 1604 there was already a large parish church, with a garden, a rectory, a school and a cemetery. It probably existed already since 1590.”

The bodies were found in sandy ground and were arranged on an east-west axis, all with heads to the west on their backs with the hands at their sides. The graves are most likely those from the children’s section of the graveyard.

One grave contains the bodies of four children. They lay in close formation but not on top of each other. All their heads are resting to one side in the same direction. The fourth child, on the edge of the group, is much younger than the others. 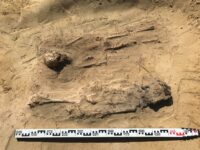 “The arrangement of the skeletons, the state of their preservation, shows that the discovery is a Catholic church cemetery, which was certainly taken care of. No grave is damaged by another. The inhabitants knew exactly where they had graves and took care of them,” said Oleszek.

There is no more church at the site, only a small memorial chapel marking the spot. The remains will be fully exhumed and studied before reburial at the current parish church.