A childhood dream of mine has been made flesh, or rather plastic brick. Just in time for people including yours truly to start begging for it for Christmas, LEGO is releasing its newest brick set: the Roman Colosseum. At 9,036 pieces, this is the largest set Lego has ever produced, colossal, you might say. The previous record-holder was the iconic Star Wars Millenium Falcon at 7,500 pieces.

One for the history buffs as well as the LEGO fans, this authentic LEGO brick recreation features many of the true-to-life details found at the real historical icon, including a recreation of the three distinct stories from the Colosseum, each made up of the columns of the Doric, Ionic, and Corinthian orders.

These columns have been faithfully recreated in LEGO brick form using a variety of creative building techniques, including decorative volutes that have been created using a re-coloured LEGO roller skate element that has been turned upside down to create an authentic look.

The Colosseum even includes 80 ‘ribs’ in the spectator stands (the exact same number as the original) and three different shades of brick to replicate the different columns and aging of the almost 2,000 year old landmark. 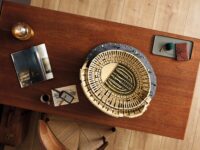 The LEGO Colosseum measures 10.5″ high, 20.5″ wide and 23.5″ deep and is built on an oval base. The base also replicates original features like the travertine paving stones and pine trees that lined the walkway In order to display architectural features like the orders of columns to their best advantage and convey the sense of monumentality in a miniature, the model’s cross-section is steeper than the proportion in the real Colosseum. 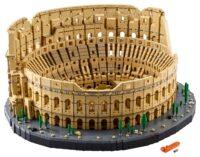 It makes for a striking display whether you position it with the northern side, the more complete wall with all the stories and columns, or the southern side whose low wall exposes the intricate interior from the elaborate hypogeum structures under the arena floor to the back of the vertically exaggerated north wall. Even though it’s huge, the LEGO Colosseum is still light enough to be easily picked up and examined. You can look through the arches, see the sunlight shine through them. 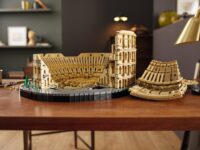 The set goes on sale November 27th, Black Friday, for $549.99, so unless Santa is a lot flusher than I thought, you can heave a sigh of relief that I won’t go AWOL after all. Buyers on Black Friday weekend will get a gift with purchase of a little chariot to go with your new Colosseum.

Then there’s this video. I just cannot even deal with how awesome it all is.

17 thoughts on “If I disappear for a month after Christmas, this is why”