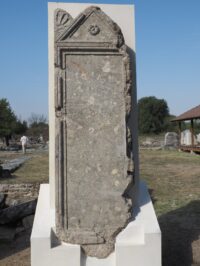 An imperial letter from the Emperor Septimius Severus to the city of Nicopolis ad Istrum in Roman Dacia (modern-day northern Bulgaria) has gone on public display for the first time in centuries. It is the only intact letter from a Roman emperor ever discovered in Bulgaria and survived because it was carved on a two-ton slab of limestone 10 feet high. The inscription was rediscovered in 1923 broken into four large and several small pieces, the fragments blackened by fire. The pieces have been kept at the Veliko Tarnovo Museum of History since their discovery, but they were only puzzled back together recently. Epigraphers have now completely translated the 37 lines of the inscription, and the stele has been reinstalled in its original location at the archaeological park near Veliko Tarnovo.

The slab was inscribed with the text of the letter in 198 A.D. and erected in the city agora so the public could read it. At some point it was toppled, probably in the 5th century when the city was destroyed by Attila the Hun. It was written at the end of a turbulent period replete with violence and uncertainty as acclaimed emperors vied for the purple and paid with their lives.

Nicopolis officials had good reason to curry favor with Septimius Severus. They had supported one of the other imperial contenders and picking a side was a very dangerous wine-in-front-of-me game in the Year of the Five Emperors (193 A.D.). Cassius Dio records that when the news of Commodus’ assassination in December of 192 A.D. spread to the provinces, several governors had the bearers of the news arrested, not because they were pro-Commodus, but because they didn’t want to be seen as being in favor of his death should the report prove untrue. Commodus’ successor Pertinax, inspired by the example of Marcus Aurelius, was a judicious, humane emperor for the 87 days he got to reign before his virtue pissed off the Praetorian Guard so hard they killed him. They then sold the throne to the highest bidder, literally holding an auction in the palace in front of the decapitated head of Pertinax on a spike. The corrupt and debauched senator Didius Julianus won.

That put Cassius Dio, a senator and eye-witness to these events, in a scary WIFOM position of his own.

As for us senators, when the news was brought to each of us individually and we ascertained the truth, we were possessed by fear of Julianus and the soldiers, especially all of us who had done any favours for Pertinax or anything to displease Julianus. I was one of these, for I had received various honours from Pertinax, including the praetorship, and when acting as advocate for others at trials I had frequently proved Julianus to be guilty of many offences. Nevertheless, we made our appearance, partly for this very reason, since it did not seem to us to be safe to remain at home, for fear such a course might in itself arouse suspicion.

Septimius Severus was in Carnutum, modern-day Austria, with his legion when they heard about Pertinax’s fate. His troops proclaimed him Emperor and Septimius marched on Rome to claim the imperial throne. Julianus dispatched Praetorians to intercept Septimius Severus and his legions, but they were crushed (or fled). On June 1st, Julianus was killed by order of the Senate. Severus took the throne, adding Pertinax’s cognomen to his regnal name in honor of the man he considered to be the last legitimate emperor. He executed the Praetorians who had participated in the assassination and restaffed the guards with troops loyal to him.

The fight was far from over, however. Other pretenders —  Pescennius Niger in Syria, governor of Britannia Clodius Albinus — were gunning for him and it another four years would pass before Septimius killed Albinus and took undisputed control of the empire. Nicopolis had to wade into this political quicksand of violence, intrigue and shifting alliances long before the final battle made it clear who would come out on top, and Septimius Severus was not merciful to his opponents or their supporters. 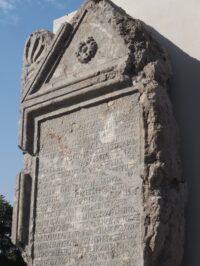 So the city did what it had to do to placate the Emperor: shower him in cash. They “donated” 700,000 denarii to Septimius Severus. In return for their generous gift, the Emperor sent a nice thank you note.

Son of the deified Marcus Aurelius Pius, the victor in Germania and Sarmatia

Anthonius Pius, great-grandson of the deified Hadrian, and descendant of

The deified Trajan, the victor in Parthia, and of the deified Nerva,

Supreme priest, holding the tribune power for the sixth time,

Grandson of the deified Marcus Aurelius Pius, the victor in Germania and Sarmatia,

The victor in Parthia, and of the deified Nerva, with tribune power and proconsul,

Greet the archons, the city council, and the people of Nicopolis ad Istrum.

We have seen your remarkable devotion declared in our decree.

As well-meaning and loyal people striving to receive a more

Favorable assessment in our eyes, you have clearly shown

That you share our joy from the recent events; you have also conducted

Mass celebrations at the news for our successes – the common peace

Which has arrived for all people thanks to the victory

Over the barbarians who constantly embolden themselves to attack the empire,

And the joint leading of the state by the two of us in just collaboration,

Together with the legal Caesar [Geta] belonging to our family.

The monetary installment of 700,000 [denarii] as coming from well-meaning people.

Our friend and legate, the excellent Ovinius sent the decree.

(Septimius was not the descendant of Trajan or Hadrian. He was just borrowing their shine to lend legitimacy to his rule.) The well-meaning people of Nicopolis did not pay their extortionate bribe in vain. The city prospered under Septimius who visited it in person several times. His son Caracalla was not as big a fan. After he became sole ruler, Caracalla stripped Nicopolis ad Istrum of its titles, its responsibility for the imperial cult and its ability to mint its own coins. They were restored after his death.

6 thoughts on “Only Roman imperial letter in Bulgaria revealed”