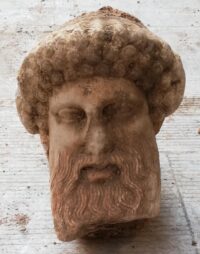 A marble bust of the Hermes, messenger of the gods, has been discovered during sewer construction in Athens, Greece. It is estimated to date from the end of the 4th century or early 3rd century B.C., when it was originally part of a herm, a rectangular pillar with a sculpted bust on top and genitalia at the base. Crews found the head on Friday, November 13th, built into the south wall of a modern drainage duct.

The newly-discovered bust is typical of the Hermes Propylaeus (Hermes of the Gateways) type created by ancient Greek sculptor Alcamenes in the mid-5th century B.C. and frequently copied throughout the Greco-Roman world. Alcamenes was known for blending elements of Archaic style from the 6th century B.C. with the greater expressive naturalism of Classical period. His Hermes couples the stylized curly hair and beard of an Archaic kore with 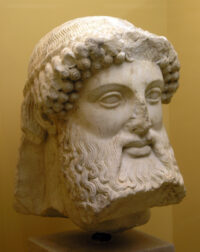 the differentiated facial features of the Classical. Also typical of the Archaic style, Hermes is depicted in mature age. His iconography would shift in the later Classical and Hellenistic periods to depictions of the deity as a lissome young man.

Because Hermes with his winged sandals was the god who protected travelers on their journeys, herms were erected at boundaries, crossroads, gateways and graves. This herm was originally a crossroads or gateway marker in Athens and was recycled for use in the sewer drains many centuries later.

The work is in good condition despite its checkered past, and is now in the care of the Ephorate of Antiquities.

7 thoughts on “Head of Hermes found in Athens sewer”