One of Diego Rivera’s greatest masterpieces, a mural at the San Francisco Art Institute, is no longer at risk of being removed and sold to pay off the institute’s $20 million debt. The San Francisco Board of Supervisors have voted to designated the mural a city landmark which means it’s staying put no matter what. 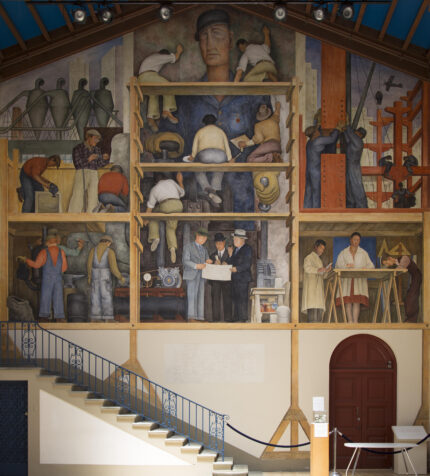 The Making of a Fresco Showing the Building of a City is boldly self-referential. As the title suggests, it is a fresco about making a fresco depicting the construction of an Art Deco cityscape. Painted on the wall of an art school It seamlessly ties together Rivera’s favorite subjects — industrial workers — with his own profession, showing his work, as it were, and illustrating the labour and mechanics undergirding his depictions of labourers.

The central figure is a giant hard-hatted worker stretching from the peak of the roof to the bottom of the mural. He operates a gear shaft and a valve, representing the coordinated labour on a massive scale required to build a city. On each side of him the cityscape rises, skyscrapers in the background, steel workers on the right join steel beams, creating the skeletal structure of a new skyscraper. To their right in the midground workers heat rivets and rivet the steel girders.

In a meta masterstroke, Diego Rivera painted himself painting the fresco. He’s seen front and center sitting on a scaffolding plank in grey pants and a yellow shirt holding a palette in his left hand and a paintbrush in his right. To his right applying wet plaster is his assistant Matthew Barnes, to his left assistant John Hastings. On the plank above him are more assistants, English sculptor Clifford Wright and English painter Viscount Jack Hastings, son of the Earl of Huntingdon.

On the top left carving stone is sculptor Ralph Stackpole, host to Rivera and Frieda Kahlo when they were in San Francisco for Rivera’s commissions. The sculptor’s assistant sharpen tools. In the panel beneath them, another sculptor chisels the stone with a forge bellows operator on his left and a belt machine operator on the right.

The machine extends into the center bottom panel where three men examine a paper. These are Rivera’s patrons: architect Timothy Pflueger who commissioned Rivera to paint a mural in the San Francisco Stock Exchange, banker and SFAI president William Gerstle and architect of the SFAI building Arthur Brown, Jr.

In the bottom right square are the architects, with the only woman in the fresco, Art Institute lecturer Geraldine Colby Fricke, standing at the drafting table, flanked by engineer Alfred Barrows and architect Michael Baltekal-Goodman. Rivera’s signature is on the underside of the drafting table.

This visionary mural was commissioned by Gerstle in 1930, then president of the SFAI. Anti-communism made it difficult for the artist to get a work visa, so a lot of strings had to be pulled before Rivera was able to get the commission. Commission secured, Rivera wasted no time. He completed the mural in less than one month, beginning it on May 1st (appropriate for art depicting labourers engaged in all kinds of work) and finishing it on May 31st.

It has been the pride and joy of the SFAI and is a required stop for all scholars and fans of Diego Rivera’s work. Unfortunately, expansion costs and a very inconveniently timed pandemic have increased the museum’s debts while kneecapping its income. SFAI defaulted on a private bank loan and the bank announced it would strip and sell the institute’s collateral, mural included. The University of California Board of Regents swooped in in October to buy the debt and gave SFAI six year to repay it or the University of California would foreclose.

All kinds of solutions have been explored — mergers, fundraising, partnering — but none of them have worked out. Last month, SFAI’s board floated the idea of selling the mural, appraised at $50 million, which would solve its money problems in one fell swoop. George Lucas was said to be interested in purchasing the mural for the Lucas Museum of Narrative Art in Los Angeles. The idea was not received well, to put it mildly.

After an outcry from artists, preservations and the press, the San Francisco Board of Supervisors voted unanimously Tuesday 11-0 to initiate the process of designating the mural as a landmark. Once granted landmark status, any changes to the fresco could only be done with the approval of San Francisco’s Historic Preservation Commission, and they are obviously never going to approve dismantling it and selling it to the highest bidder.

3 thoughts on “Endangered Diego Rivera mural to get landmark status”