Ten hand-drawn maps that are the only surviving contemporary drawings of the defeat of the Spanish Armada have been saved from export into an unknown private collection and will be acquired by the National Museum of the Royal Navy (NMRN). The ink and watercolor drawing were sold to a private collector last July for £600,000. The foreign buyer applied for an export license and the Culture Minister placed a temporary bar on export to give a UK institution time to raise the purchase price and keep these irreplaceable pieces in the country. The NMRN’s campaign achieved the goal in just eight weeks, thanks to grants from the Royal Navy (£100,000), the National Heritage Memorial Fund (£212,800) and the Art Fund (£200,000), and donations from the public.

The maps were drawn by an unknown artist probably from the Netherlands as there is a Flemish language annotation in the margin of one drawing and evidence of removed inscriptions on some of the other maps. They are cognates of now-lost engravings made in 1590 by Augustine Ryther. They are not copies of those engravings, although it’s also possible they were copies of Ryther’s source: drawings by Robert Adams, the military engineer who was Surveyor of the Queen’s Works and whose abilities as a draughtsman and cartographer placed him in the ranks of the great miniaturists of the Elizabethan court. Whoever drew these maps stopped midway through the job. Researchers believe these drawings may have been intended for unauthorized publication in the Netherlands and were abandoned when the official Ryther engravings were published.

The drawings are sequential depictions of the clash progression of the engagements that resulted in the surprise victory of the heavily outnumbered English fleet over what had been Europe’s greatest naval power. On July 22nd, 1588, an invasion fleet of 138 ships was dispatched by King Philip II to conquer Britain, depose its Protestant Queen and end the harassment of its New World treasure ships by British privateers. They were sighted off the coast of Cornwall on July 29th and first engaged two days later near Plymouth by British ships commanded by Lord High Admiral Charles Howard, 2nd Baron Howard of Effingham, and Vice Admiral Francis Drake.

The first three maps depict the sighting, first engagement and its aftermath. The fourth depicts Drake’s capture of Nuestra Senora del Rosario and Howard’s pursuit of the Armada. Map five features the capture of the San Salvador and the battle off Portland Bill. The sixth continues the Portland Bill engagement, the seventh the subsequent battle off the Isle of Wight. The English pursuit of the Spanish to Calais is on map eight. The ninth map depicts the high drama of the fireship attack against the Spanish ships anchored at Calais. The final map covers the Battle of Gravelines on August 8th, the last engagement before the Spanish fleet was blown off-course to the North Sea where it met destruction at nature’s hand rather than Elizabeth’s.

The maps are incredibly detailed artistic renderings of ships’ movements over the nine days from first sighting to final clash. (See this page on the NMRN website for a thorough explanation of the drawings.) Despite their international significance, the earliest date on the record today of somebody owning the ten drawings is 1828 when they were in the collection of bibliophile antiquarian MP Roger Wilbraham. They remained in the family for seventy years before being sold at auction to London booksellers J. Pearson and Co. William Waldorf Astor bought them from J. Pearson. It was the Astor descendants who sold them last year.

The National Museum of the Royal Navy is still taking donations for the Astor Armada Drawings, now to ensure their conservation and display both in Portsmouth and on a national tour when COVID permits. 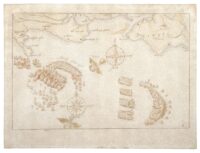 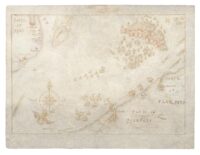 3 thoughts on “Rare Armada maps saved for the nation”