A hoard of more than 600 silver coins from the Late Roman Republic era has been unearthed in the ancient city of Aizanoi, western Turkey. The coins, Roman 439 denarii and 212 cistophori from Pergamum, were discovered in September 2019 on the banks of a river. They were found packed inside a jug which was then surrounded by three terracotta plates to hide it.

Archaeologists removed the vessel so it could be excavated in laboratory conditions. All of the coins were found to date to the last century of the

Roman Republic, the reign of the first emperor, Augustus. Many coins bear the portraits of Julius Caesar, his assassin Brutus, Mark Antony and Augustus. There are also coins minted by Augustus’ right hand man and future son-in-law, Agrippa when he was governor of Gaul (38 B.C.). A collection of portait-heavy coins like this is known as a coin album, like the numismatic version of a photo album. Excavation leader Professor Eliz Özer speculates that the coins might have been stashed by a Roman military officer.

“One or two of these coins found in the collection are of higher value. It has been observed that most of the coins were minted in Southern Italy mints. These are the most special silver coins that have been found in recent times,” Özer said. 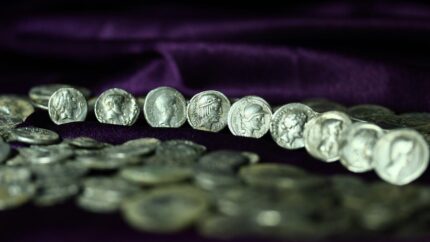 Originally settled around 3,000 B.C., Aizanoi was part of the Attalid Kingdom of Pergamum which was bequeathed to the Roman Republic by its last king, Attalus III, in 133 B.C. It reached its apex of prosperity in the 2nd and 3rd centuries A.D. when the city’s great monumental structures —

public baths, a macellum (market) inscribed with the Price Edict of Diocletian, a combined theater and stadium seating 33,500 that is unique in the Roman world — date to this period. Aizanoi’s Temple of Zeus, begun under Domitian in the late 1st century, is the best-preserved temple in Anatolia today.