A late Imperial necropolis has been discovered in the center of the two of l’Île-Rousse on the western coast of northern Corsica. The burial pits were dug out of the rock and filled with different styles of grave. About 40 graves have been found, the majority of them amphora burials in which large storage amphorae were used as coffins. There are also some tile burials, where recycled edged roof tiles (tegulae) and joint covers (imbrices) were perched over the deceased.

There is evidence of human settlement at the site going back to the Neolithic and the Phoenician colony of Agilla was established was at the site by 1000 B.C. After the fall of Tyre to the Babylonian king Nebuchadnezzar in the 6th century B.C., Carthage stepped into the power vacuum and took over support of its former dependencies, including the ones in Corsica. That ended with the Roman conquest of Corsica in the First Punic War in 238 B.C. Agilla became the Roman town of Rubico Rocega for the next 600 years.

After the fall of the Western Empire, Rubico Rocega was largely abandoned, used by smugglers and fishermen, until the founding of l’Île-Rousse in the mid-18th century. Very few remains from the Phoenician and Roman towns have been found, and this is the first archaeological excavation of the center of the modern city and the first precise confirmation that the Roman city was located at the site of modern-day of l’Île-Rousse.

The evidence from the necropolis demonstrates that the Roman city still had strong trade links to North Africa. The amphorae from the burials were

mostly manufactured in Carthage, now a Roman province and the primary source of wine and olive oil imports to Corsica in the 4th century A.D.

No grave goods or funerary offerings have been found. The burials are oriented west-east, with the heads on the west side and feet to the east. The skeletal remains are not in great condition and there has been significant deterioration of the surfaces of the burial pits caused by the development of the town in the 19th century. The Church of the Immaculate Conception, completed in 1893, was built right next to the necropolis, and there was copious infilling done at the time to level out the slope of the hill. 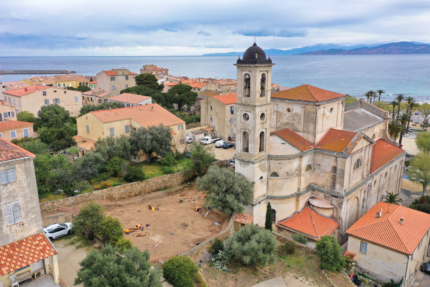