More than 50 pieces of bronze jewelry from the late Bronze Age have been discovered in Alingsås, southwestern Sweden. Dating to between 750 and 500 B.C., it is one of the largest Late Bronze Age ceremonial depositions ever found in Sweden, and one of the most spectacular in terms of quality and condition of the objects. It’s also the first time since the Fröslunda shields were unearthed in the 1980s that a Swedish Bronze Age votive find has been excavated by archaeologists.

The first objects were found by chance by Tomas Karlsson who was documenting the wooded terrain for an orienteering map. He spotted 10 pieces scattered on open ground in front of some boulders. At first he thought they were trash, random metal bits from a broken lamp, perhaps. When he leaned closer, he saw an intricate spiral and a necklace. 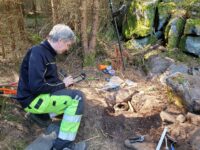 learn everything they could about their context. Last week, archaeologists and conservators from the regional cultural development administration teamed up with researchers from the University of Gothenburg to survey the find site. They found about 50 objects either intact or in large part extant, plus about 20 bronze fragments of indeterminate origin and 10 iron fragments.

About 20% of the objects were found inside a pot placed under a boulder.

The other 80% were found outside the pot but in proximity to it. Archaeologists suspect the objects had been dislodged from under the pot by wild animals using the spaces between and beneath the boulders to burrow and/or nest.

They artifacts in such pristine condition that at first glance they were suspected of being modern copies, but closer inspection revealed that they were authentic Bronze Age pieces.

“Most of the finds consist of bronze objects that can be associated with a high-status woman from the Bronze Age. They have been used to decorate various body parts, such as necklaces, bracelets and foot rings,

but also large needles and hoops that have been used to decorate and hold up various forms of clothing that were probably made of wool,” says Johan Ling professor of archeology at the University of Gothenburg .

In addition to necklaces, clothes pins, spirals, chains and a tutulus (clothing or belt ornament), a hollow ax and residual products from

bronze casting were found. A rod that is believed to have been used to stimulate and spur horses was also found. It is a type of object that has been found in Denmark but not so far in Sweden. 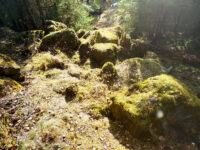 reasons. Usually these sacrifices were made in and around lakes and rivers, so the ritual offerings have been unearthed in the peat bogs and agricultural land the ancient bodies of water turned into over the centuries. This site is woodland, not wetland, and it was forested when the objects were deposited.

The objects are now being conserved and studied, with the immediate emphasis on ensuring their stability now that they’ve been removed from the protective cocoon and exposed to air. Eventually they will likely be put on public display in a museum close to the find site. 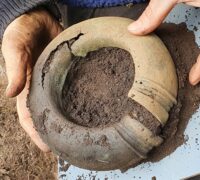 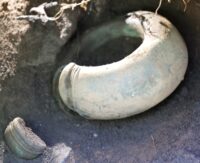