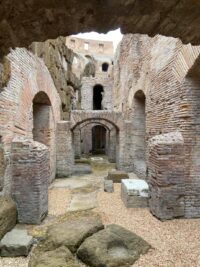 For the first time in the Colosseum’s long history, the subterranean levels will be fully open to the public. The hypogea, the backstage (understage?) area where gladiators and beasts awaited deployment via ingenious raising mechanisms that thrust them up through trapdoors onto the arena, have never before been open in their entirety to visitors.

When the Flavian Amphitheatre was inaugurated in 80 A.D., the underground structures were wood. Ancient sources including Martial, who was an eye-witness to the inaugural games and recorded the events in his Epigrams, Suetonius and Cassius Dio refer to the arena having been flooded to stage naval battles and other water spectacles, but this could not have been the large-scale warship clashes that were held at the permanent lake created by Augustus for the purpose. If it was floodable, it was likely more like a channel system or simply a shallow basin under the stage. 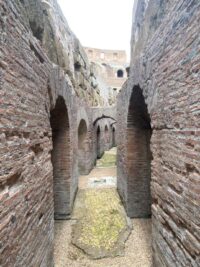 Whatever the nature of the water shows at the Colosseum, in 85 A.D. Domitian had the original underground replaced with the complex vaulted tunnels and shafts of brick and stone structures we see now, so there arena could no longer be floodable. A large central passage divides 14 corridors, seven on each side. At the ends of the corridors are rooms which held large freight elevators that raised fighters, prisoners, props and animals up to the arena floor with complex wood and rope pulley systems.

This is the final phase of a decade-long restoration funded by Tod’s shoe mogul Diego Della Valle who donated €25 million to keep the world wonder from literally falling to pieces and taking untold numbers of tourists with it. After directed restoration work, a small section of the hypogeum was opened to the public in 2016 but the underground was closed off again when the comprehensive restoration of the entire space began in December 2018.

Starting June 26th, visitors who purchase the “Full Experience” ticket can safely explore the 15 corridors trod by gladiator and wild beast over 160 meters of accessible passageways that have been mounted throughout the labyrinthine environment. Audio/video and human guides will explain how the hypogeum was used over the centuries between the Colosseum’s 100 days of inaugural games and celebration of the last games held there, an animal hunt in honor of the consulship of Anicius Maximus in 523. 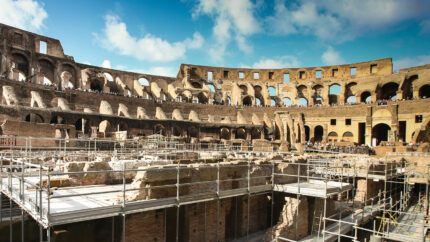 2 thoughts on “Colosseum underground opens to the public”