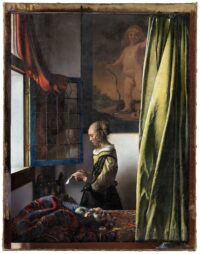 A painting of Cupid hidden behind a layer of grey has reemerged on the wall behind The Girl Reading a Letter at an Open Window by Johannes Vermeer. After more than three centuries of grey overpaint and four years of meticulous restoration, the Girl, now backed up by Cupid, will be the centerpiece of a new exhibition dedicated to Vermeer at the Gemäldegalerie Alte Meister in Dresden.

Painted ca. 1659, it was bought by Augustus III of Poland, Elector of Saxony, from the prized art collection of Victor Amadeus I of Savoy, 3rd Prince of Carignano, in Paris in 1742. It became part of what is now the Dresden Gemäldegalerie. It was misattributed to Rembrandt at the time, a recognition of its quality even as the master who produced it was largely forgotten outside of the Netherlands. It wasn’t correctly attributed to Vermeer until 1859.

We know from correspondence about the purchase that the wall was already Cupidless when the painting arrived in Dresden. X-rays revealed the presence of the Cupid in 1979, but researchers at the time believed the figure had been overpainted by Vermeer himself. When a new comprehensive restoration began in 2017, conservators removing the old yellowed varnish layer discovered that the paint in the central part of the wall had markedly different solubility properties than the rest of the paint. This spurred further investigation of the paint layers which revealed that the presence of a dirt layer and binding agent between Vermeer’s original paint and the overpaint that covered the Cupid. Several decades passed between the completion of the work and the overpainting. That means it was not Vermeer’s choice to eliminate the Cupid painting towering behind the young woman as she reads her (love?) letter.

In the light of the discovery that the overpaint was not done by Vermeer, a commission of experts decided to remove the overpaint in early 2018. The ultrathin layer of paint had to be removed under magnification using a small scalpel. No other method would preserve the last varnish layer applied by Vermeer’s hand. This painstaking scalpel technique was slow going, but as of earlier this year, Cupid is back.

The composition is notably different. The Cupid painting is large, covering most of the empty space on the grey wall and providing a new dark background for the young lady’s golden hair. Cupid himself is about half the height of the girl. He holds his bow on his left side and arrows aloft in his right hand. Two masks are on the ground at his feet. They represent true love’s disdain of falsehood in favor of truth and loyalty.

Vermeer used the trope of the Cupid painting-within-a-painting four times that we know of, including in Lady Standing at a Virginal , which has been loaned to Dresden by London’s National Gallery for the new exhibition.

Along with nine other paintings by Vermeer, including the “Woman in Blue Reading a Letter” (Amsterdam, Rijksmuseum) and the “Lady Standing at a Virginal” (London, National Gallery), which are closely related to the painting, some 50 works of Dutch genre painting from the second half of the 17th century will be on display. Paintings by Pieter de Hooch, Frans van Mieris, Gerard Ter Borch, Gabriel Metsu, Gerard Dou, Emanuel de Witte and Jan Steen will show the artistic environment in which Vermeer worked and with which he was in close contact. Selected examples from other artistic genres, such as drawings and prints, sculptures and historical furniture will further enrich the exhibition. A segment of the exhibition will be specifically devoted to Vermeer’s painting technique and the restoration of the “Girl Reading a Letter” in order to illustrate the complex, experimental process used in creating the painting.

One thought on “Vermeer’s Cupid returns”