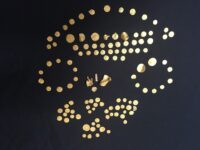 A group of 131 gold coins discovered sporadically over the course of 30 years in a West Norfolk field have been declared the largest hoard of Anglo-Saxon coins ever discovered in England. The Norfolk coroner opened an inquest on Wednesday to determine whether the coins qualify as treasure.

The hoard was buried around 600 A.D. It contains mostly Frankish tremisses, small gold coins made in what is now France and the low countries in the early 7th century. Only about 100 Merovingian Tremisses in

total have been found in Britain before, so this hoard doubles the number on the archaeological record. In addition to the Frankish coins, there are nine gold solidi of the Byzantine Empire, a larger coin worth about three tremisses. Four other gold objects — a bracteate pendant, an ingot and two fragments of larger pieces of jewelry — were also part of the hoard.

Individual pieces were discovered in this one field in West Norfolk now and again by detectorists and archaeologists starting in 1991. The biggest group, about 35 coins, were unearthed by a single metal detectorist between 2014 and 2020. The detectorist, who has chosen to remain anonymous, reported to them to the Norfolk Finds liaison officer as required by law.

Ten of them were unearthed separately by a different detectorist, off-duty police officer David Cockle. He did not report them. He didn’t even tell the landowner who gave him permission to scan the field that he’d found the coins, because then he’d have to split the proceeds. Instead, he tried to sell them on the sly. Two were sold on the antiquities market before his illicit smuggling was found out, and they have not been recovered. Cockle was fired from the Norfolk Police for gross misconduct and sentenced to 16 months in prison after pleading guilty to theft.

The previous largest coin hoard of the Anglo-Saxon era, the Crondall Hoard, discovered in Crondall, Hampshire, in 1828, consisted of 101 coins. It was buried a little later, before 650 A.D., and contains 73 English coins, the first coinage produced in Britain after the Roman withdrawal. It may have originally been larger, but was scattered by agricultural activity. The same fate likely befell the West Norfolk hoard, which is why it was found piecemeal in the field.

The most comparable deposit of coins from the Anglo-Saxon period before the reintroduction of English coinage comes from one of the greatest archaeological finds in British history: the Sutton Hoo ship burial. A purse found inside the burial contained 37 Frankish Tremisses ranging in date from 572 to 625 A.D. Before the discovery of the West Norfolk coins, the Sutton Hoo coins were the only large assemblage of Anglo-Saxon coins from before coin production began again in England.

The coroner’s inquest is sure to declare the hoard treasure as it qualifies under the terms of the  Treasure Act, after which a local museum will be given the opportunity to acquire the hoard for the fair market value as determined by a British Museum valuation committee. The Norwich Castle Museum is keen to secure this unique hoard.

Tim Pestell, the senior curator of archaeology at Norwich Castle Museum and Art Gallery, called it an “internationally significant find”. He said: “Study of the hoard and its find spot has the potential to unlock our understanding of early trade and exchange systems and the importance of west Norfolk to East Anglia’s ruling kings in the seventh century.”