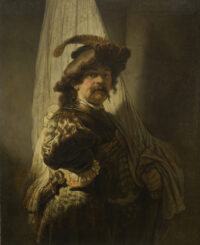 The Netherlands has acquired Rembrandt’s The Standard Bearer for the national collection, spending more money than the Louvre could dream of raising to buy it from the French branch of the Rothschild family.

Rembrandt painted The Standard Bearer in 1636 when he was 30 years old. It’s a self-portrait in three-quarters length, depicting the artist in the shimmering outfit of a standard-bearer in the Eighty Years’ War. His hand on his hip, Rembrandt stares jauntily out at the viewer while the standard drapes behind him and over his left hand. This is one of the first paintings Rembrandt made after opening his studio in Amsterdam, and his choice to style himself as a militia man in all his finery was a deliberate choice to promote his services for the most valued commission of the era: a group portrait of city militia. Six years later, Captain Frans Banninck Cocq commissioned Rembrandt to create a portrait of his company of Amsterdam civic militia and the Night Watch was born.

According to the Rijksmuseum director Taco Dibbits, The Standard Bearer “is a unique work that belongs to the top 10 of [Rembrandt’s] oeuvre. The self-portrait is, in fact, his artistic breakthrough in the run-up to The Night Watch. It is deeply rooted in Dutch culture and history and symbolizes the rebelliousness of the painter and his country.”

It has always been in private collections, King George IV’s among them. The French branch of the Rothschild banking dynasty has owned it since 1844. In 2018, the Rothschilds approached the French government and the Rijksmuseum offering the painting to both. Three years earlier the Rothschilds had successfully sold the only full-length portraits Rembrandt ever painted to France and the Netherlands, and they were hoping to pull a similar rabbit out of the hat with The Standard Bearer which costs more individually than the pair of portraits did together.

This time France put a temporary export block on the painting to give the Louvre 30 months to raise the purchase price of 165 million euros. The Louvre was unable to put together the necessary sum within the 30-month window, so in December 2021 the race to the sale was back on. The Rijksmuseum wasted no time. Director Taco Dibbits declared the museum willing to “go to extremes” to secure the portrait and he was not kidding.

It was so expensive it literally required an act of congress (okay technically parliament) to buy. The Dutch House of Representatives had to approve an amendment to the budget of the Dutch Ministry of Education, Culture and Science to allocate €150 million for the purchase, that’s €131 million on top of the €19 million from the Museum Purchase Fund budget. The Rembrandt Association will pitch in another €15 million and the Rijksmuseum Fund €10 million.

Once the sale is concluded, The Standard Bearer will tour the Netherlands, going on display in every province of the country. It will then find its permanent home in the  Rijksmuseum’s Gallery of Honour.