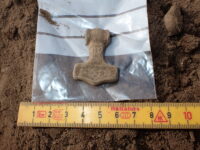 Archaeologists have discovered a lead Thor’s hammer amulet dating to the late 10th century in Ysby in southwestern Sweden’s Halland province. The hammer was unearthed at the site of future housing construction. Previous investigations at the site revealed archaeological remains from the Neolithic and Iron Age, but this is the first artifact from the Viking era discovered there. It’s also the first Thor’s hammer amulet found in Halland.

The amulet is 3 centimeters (1.18 inches) long and cast in lead in the stylized shape that represents Thor’s dwarf-crafted hammer Mjölnir. It has a hole in the shaft where a string or a tie of some sort was threaded through so it could be worn as a pendant. One side of the hammer’s head is engraved with an interlacing pattern.

These were popular accessories in the Viking era, worn as apotropaic amulets, calling on the protective power of Thor to ward off evil. About a thousand of them have been found in Scandinavia, the UK, Russia and the Baltic countries. When this one was being worn, the Halland area was beginning to convert to Christianity. A pendant like this had religious significance beyond its purported warding powers, because it was unmistakable symbol of adherence to Form Sidr (meaning “the old way” ie, the traditional Nordic gods) as opposed to the new way of Christianity.

Here is a 3D model of the hammer before cleaning and conservation. A more detailed one will be made after the conservation is complete.