In the ancient city of Ephesus on what is today the west coast of Turkey, archaeologists have discovered an early Byzantine business and dining district that met a sudden violent end in 614/615 A.D. A thick fire layer points to the means of its demise. That layer is also responsible for the preservation of the contents of the rooms, providing a unique snapshot of the shops and pubs of Byzantine Ephesus.

The Ephesus area has been settled since the 7th millennium B.C., and the Greek city was built by colonists in the 10th century B.C. It thrived as a center of commerce and was one the most important and populous

cities of Roman Asia Minor. It was also a center of the Early Christian church from the mid-1st century. Under Byzantine rule, Ephesus was second in importance only to Constantinople. The city’s fortunes took a heavy hit from invading Goths (263 A.D.), the silting over of its Aegean harbor in the 7th century, several sackings by Arabic forces and the Seljuk Turks. By the time it was incorporated into the Ottoman Empire in 1425, Ephesus was a sleepy village, soon to be abandoned.

While its existence was locally known (its ancient buildings were a ready source of stone for building and grinding into lime powder), systematic archaeological excavations of ancient Ephesus were not undertaken until the late 19th century. The Austrian Archaeological Institute has been excavating ancient Ephesus since 1898 (with the occasional pause for world wars, diplomatic tensions and pandemics).

The business district was discovered in an excavation of Domitian’s Square near the Upper Agora, the Greek and Roman city’s civic center. In late antiquity, the large Roman square had been partially built over with workshops, stores and purveyors of food and drink. So far, one smaller building covering an area of about 1830 square feet has been uncovered. That one building contained a cooking shop, a storage room, a tavern, a store selling terracotta lamps and Christian pilgrimage trinkets with its associated workshop and sales room. They were all doing gangbusters when disaster struck, because beneath the burn layer was an incredible profusion of objects, including thousands of pieces of crockery, food remains and coins. About 600 pilgrim bottles — small ampules for sacred relics that were perforated to be worn as pendants — have been found in the workshop, a discovery without precedent on the archaeological record.

The storage room was filled with vessels, many of them still with the remains of their original contents like cockles, oysters, salted mackerel, peaches, almonds, olives and pulses. There were sets of small pitchers and cups, used to serve customers in the adjoining tavern. Objects were pancaked on top of each other where they fell from their shelves, allowing archaeologists to reconstruct the shelves and what they held before the collapse. Also inside the storage room were more than 500 bronze coins found together in a single group. These are either the savings or the cash in the register of one of the businesses. Most of the coins date to the reign of the Byzantine Emperor Phocas (602-610). The most recent coin in the hoard dates to 614/5 A.D., the reign of the Emperor Heraclius.

The date range of the coins is strong evidence that the event that destroyed the shopping and dining district of Byzantine-era Ephesus took place in 614 or 615.

“The archaeological findings show us a massive fire destruction that must have been sudden, dramatic and momentous,” explains [OeAW archaeologist] Sabine Ladstätter. “It will no longer be possible to determine the exact day of the destruction, but the evaluation of the fruits found will at least clarify the season.” Was it an earthquake? There is no evidence of this. The walls are neither shifted nor are the floors arched. No human remains were recovered either.

However, a number of arrow and lance tips were found, which provide evidence of a military conflict. It is fitting that coins found around the same time in the Turkish city of Sardis, around 100 kilometers from Ephesos, also indicate destruction. These were previously associated with incursions by the Persian Sasanids into western Asia Minor, but this has so far been controversial in research.

The new finds at Domitian’s Square could now solve a riddle of the history of the city of Ephesus. Ladstätter: “Although it has been possible to observe archaeologically up until now that the city drastically decreased in size in the 7th century and the standard of living had dropped significantly, the reasons for this were not clear.” than in previous centuries. “This turning point in the history of the city of Ephesos will probably have to be linked to the Sasanian Wars,” says the OeAW archaeologist. 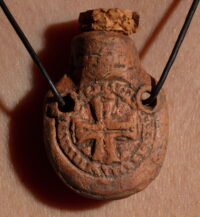