An exceptionally rare gold medallion issued by the emperor Maxentius around 308 A.D. that is one of only two known surviving in the world will be sold at auction next week. It is a quaternio, meaning a single gold coin worth four aurei, although of course it was not intended for circulation. It was a commemorative issue for Maxentius to celebrate his reconstruction of the Temple of Venus and Roma in the Eternal City. 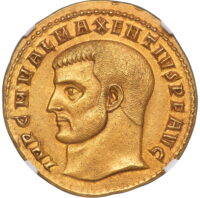 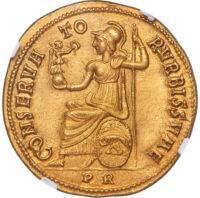 The Templum Veneris et Romae was a double temple dedicated to the goddess Venus Felix, mother of Aeneas and through him of the Roman people, and to Roma Aeterna, the deity who was the personification of the city and larger state. The temple was constructed by Emperor Hadrian in 135 A.D., but he didn’t just order it built. He fancied himself something of a draftsman/architect and he personally designed the plans for this temple. They were not universally acclaimed, to put it mildly, and when Trajan’s revered architect Apollodorus of Damascus voiced his objections to Hadrian’s plan, the emperor had him executed and built it the way he wanted.

[T]he true reason was that once when Trajan was consulting him on some point about the buildings he [Apollodorus] had said to Hadrian, who had interrupted with some remark: “Be off, and draw your gourds. You don’t understand any of these matters.” (It chanced that Hadrian at the time was pluming himself upon some such drawing.) When he became emperor, therefore, he remembered this slight and would not endure the man’s freedom of speech. He sent him the plan of the temple of Venus and Roma by way of showing him that a great work could be accomplished without his aid, and asked Apollodorus whether the proposed structure was satisfactory. The architect in his reply stated, first, in regard to the temple, that it ought to have been built on high ground and that the earth should have been excavated beneath it, so that it might have stood out more conspicuously on the Sacred Way from its higher position, and might also have accommodated the machines in its basement, so that they could be put together unobserved and brought into the theatre without anyone’s being aware of them beforehand. Secondly, in regard to the statues, he said that they had been made too tall for the height of the cella. “For now,” he said, “if the goddesses wish to get up and go out, they will be unable to do so.” When he wrote this so bluntly to Hadrian, the emperor was both vexed and exceedingly grieved because he had fallen into a mistake that could not be righted, and he restrained neither his anger nor his grief, but slew the man.

The temple was huge, built on a platform 475 feet long and 330 feet wide along the Sacred Way on the slopes of the Velia hill next to the Colosseum. More than 100 feet high, it was the largest temple in the city and for centuries one of the most important shrines in the empire. Construction of the temple is what spurred the removal of the colossal statue of Nero, which gave the Flavian Amphitheater its nickname. (The machinery Apollodorus talks about being stored in the temple were the apparatuses used in the spectacles at the amphitheater.) Hadrian took a non-standard approach to temple design, placing the cellae (the rooms where the images of the goddesses dwelled) back-to-back instead of side-by-side. This was a bit of an anagram pun on Hadrian’s part. AMOR (love) is ROMA spelled backwards. 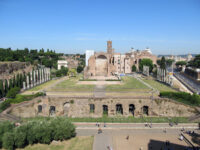 When the temple was heavily damaged in a fire in 307 A.D., Maxentius rebuilt it. He did not follow in Hadrian’s architectural footprints, but instead had it reconstructed in the apdsidal form with vaulted ceilings that was typical of early 4th century Rome. He replaced the burned wooden ceiling with a stone coffered vault and doubled the thickness of the walls to support it. He also redid the cellae so they conformed to the classical design that Hadrian had eschewed. Most of the temple was destroyed in an earthquake in the 9th century and the church built in the ruins, but the remains of the cella and vaulted apse still stand today.

Maxentius made this project the cornerstone of his imperial identity. For four years, the rest of his reign until his death in battle against Constantine in 312 A.D., he struck widely circulated bronze and silver coins depicting himself on the obverse and the goddess Roma sitting in a hexastyle temple on the reverse. The inscription on the reverse, CONSERVATOR VRBIS SVAE, means “preserver of his city,” and Maxentius certainly strove to earn the title. He poured money into the renewal of Rome, restoring old public buildings and constructing new ones.

In addition to the circulating coins, the emperor had special issue ultra-valuable, ultra-fine commemorative gold medallions made conveying the same sentiment. The one coming up for auction features the bare head of Maxentius facing left on the obverse, and Roma seated on a shield decorated with the she-wolf and twins Romulus and Remus. A winged Victory stands on a globe in Roma’s hand. The pre-sale estimate is $100,000 – $200,000, but it could well go much higher. An even finer issue of an eight-aurei medallion featuring Maxentius on the reverse as well, holding a scepter and receiving a globe from Roma, set a new world record for Roman gold coins when it sold at auction for $1.4 million in 2011.

Maxentius would be the last emperor to live in Rome, but his dedication to the physical fabric of the city was forgotten, largely by design of his successor. Constantine issued a damnatio memoriae decree against Maxentius, destroying all public references to him, including the inscriptions on the buildings he had restored or constructed. Constantine took all the credit for them instead, propped up by Christian writers villainizing his former rival as a tyrannical brute and lionizing Constantine, who built a new capital a thousand miles away and named it after himself, as Rome’s reviver.