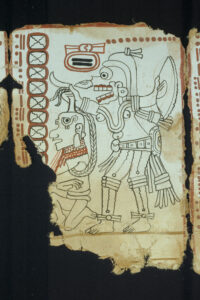 The Códice Maya de México, also known as the Grolier Codex, is the oldest surviving book in the Americas. It is one of only four known Maya codices that survived the book-burning zealotry of the Spanish occupiers, and the only one to have survived the centuries since the conquest on the continent where it was made. It is now on display at the Getty Center Museum, its first return to the United States since it made its public debut at the Grolier Club in New York in 1971.

The book was painted by a single artist on paper created from the inner bark of fig trees (amate paper) then coated with gesso to prep the surface for painting. It is painted on only one sideThe text records the movements of Venus over its 584-day cycle as the Morning and Evening Star.

The story behind its discovery reads like fiction. It involves a mysterious plane ride to an unnamed destination somewhere in Chiapas where the codex was sold to a Mexican collector by looters who claimed to have found it in a cave. Because of its extreme rarity, some unusual characteristics not seen in other codices and a find story so implausible it would make Indiana Jones blush, the Grolier Codex was long believed to be a forgery. 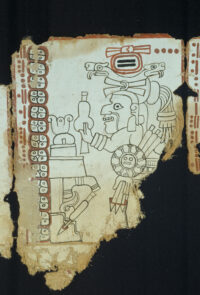 Mexican authorities restricted access to the fragile codex and scholars had to rely on photographs to study the book. In 2017, Mexico’s National Institute of Anthropology and History (INAH) enlisted an international team of researchers to do the first scientific analysis and testing of the codex. Tiny samples of the pages confirmed that the bark paper was made of authentic amate fibers, and that the edges were not cut with metal tools, so it wasn’t ancient paper that was reused by forgers. A section of Maya blue pigment extracted from indigo plants with a local clay confirmed that the painting was ancient too. (The secret to Maya blue was lost after the Spanish conquest and the pigment was only synthetically recreated in the 1980s.) Finally, the study dated the book to between 1021 and 1154, older than the three Maya codices now in European museums and therefore the oldest surviving book in the Americas.

Nacional de Antropología e Historia. It almost never leaves the safety of its room.  A year after it was first exhibited in public at the Grolier Club in New York City in 1971, the Mexican government confiscated the codex. After that, it was exhibited exactly twice at the Museo Nacional de Antropología in Mexico City. It hadn’t been to the United States since and it had never been to Los Angeles before it went on display at the Getty Center Museum last month. The exhibition runs through January 15, 2023.

In conjunction with the exhibition, the Getty has created a fascinating video about the codex’s creation with a focus on the traditional Maya craft of making amate paper from the bark of fig trees.