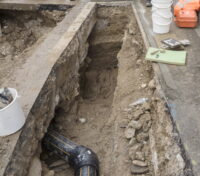 An excavation of the Kleinbasel neighborhood of Basel, Switzerland, has brought to light 15 graves, some of them richly furnished, from an early medieval burial ground. The presence of a burial ground from this period had been known since the 19th century, so a rescue archaeology excavation was undertaken in the area before installation of new utility pipes. Earlier this year the excavation unearthed the 6th century grave of a young girl buried with a dazzling array of about 380 beads. The recent discoveries prove that the cemetery was more densely populated than archaeologists realized. 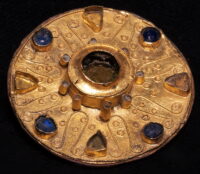 One of the highlights of the newly-discovered graves is that of an elite young woman who was about 20 years old when she died in the 7th century. The grave was damaged during construction in the early 20th century. The skull is lost, as is the body below the knees, but the riches she was buried with remain. The grave contained a rare gold disc brooch made of a base plate made of a non-ferrous metal that was then topped with gold. The disc was then adorned with gold wire filigree and inlayed with green garnet gemstones and blue glass. The brooch likely held together a cloak, now gone, at her neck. She was also wearing a necklace made of 160 glass, amethyst and amber beads (or had them sewn onto the collar or bodice of her garment). There was also a leather strap decorated with metal crosses that terminates in a large amber pendant. Around her waist was a belt with an iron buckle and a silver tongue. Hanging from the belt was a chatelaine with pierced Roman coins, metal artifacts and a bone comb.

Other notable graves found in the current excavation include a child’s grave containing a large silver inlay belt buckle, metal belt fittings, scissors and a comb, and a stone cist grave containing the skeleton of an adult man. The man’s face bears the unmistakable evidence of violent blow from a sword. Amazingly, the man survived the disfiguring injury as he died after it was fully healed.

Basel was founded as a Celtic oppidium, or fortified settlement, in the 1st century B.C. The Romans built a military camp on the site of the settlement and by the end of the 1st century A.D., it was absorbed into

the Roman province of Germania Superior. Roman control weakened in the 3rd century, but the troops along the Rhine managed to repel invasions from the Germanic Alemanni confederation several times in the 4th century. The Alemanni finally won around 406 A.D., settling throughout the Swiss Plateau. They and the Franks after them occupied the old Roman castle and the town’s fortunes were revived. It was minting its own coins in the 7th century and was made a bishopric in the 8th. The Roman castle was converted into Basel’s first cathedral. What is today the Kleinbasel area was the castle/cathedral hill, the nucleus of the early medieval settlement. 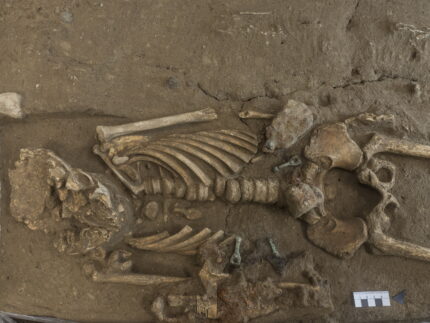