Restoration of the marble reliefs on the north façade of the Duomo of Florence has revealed original polychrome paint on an exterior sculpture of Madonna and Child with Adoring Angels. The sculptures date to 1359-1360 and are mounted in an arched niche above the Porta dei Cornacchini, the door in the north wall of the cathedral. While the marble in the background is colorful — the Duomo is famous for the white, pink and green marble cladding that gives the cathedral its distinctive look — the sculptures themselves were previously believed to have been left the natural white of the marble.

The marbles of the north façade were in dire need of conservation, having suffered extensive erosion from rainwater runoff, deposits of surface dirt, black sulfurous encrustations and bird poop galore. Since restoration work began in September 2021, experts from the Opera di Santa Maria del Fiore have cleaned more than 10,000 square feet of marble. The process revealed extensive traces of the paint, including the

brown iris of Mary’s left eye, the blue-green color inside her mantle, red on the outside of her mantle and a rich damask pattern on the garment worn by the Christ Child. This is the first time such large sections of polychrome paint have been found on an exterior sculpture of the Duomo. Previous finds were just tiny glimpses — a few dabs of gilding and light blue on other sculptures.

Earlier attempts at restoration did more harm than good to the original colors. A coating of brown oxalate applied directly to the surface of the marble in the 1950s has darkened over the decades, obscuring the traces surviving paint. Conservators removed the layer of fluorosilicate over the oxalate, but decided to keep the oxalate in place because it protects the surface of the marble even as it darkens it. 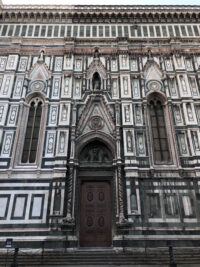 The museum has said that this sculpture group was most likely not the only one on the Duomo in polychrome, though now they appear to be marble white.

The find has led to the image of the Duomo as one in color, with white, green, and pink on the exteriors and red and gold mosaics on the facade.

“The exciting find of multiple colors of the figures on Porta dei Cornacchini of the Florence cathedral,” said Duomo museum director Timothy Verdon. “It reminds us that Florence at the end of the 14th century and beginning of the 15th was a very colourful city. The cathedral also had painted statues with gilding on the wings of angels and on clothing – thus, a celebration. A celebration that we forgot and are beginning to rediscover.”

See the conservators at work cleaning decades of filth off the sculpture in this video: