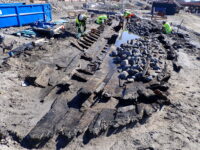 The wrecks of two cogs dating to the middle of the 14th century have been discovered in Varberg, Sweden. The cogs were discovered this spring during an archaeological investigation in advance of a railway tunnel construction. The wooden remains were unearthed from what in the Middle Ages was the shoreline of the town of Getakärr (which charmingly means goat marsh), Varberg’s medieval predecessor. Cogs are rare finds and finding two of them 30 feet apart is unique. 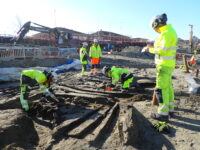 The first Varberg cog is the largest and the best preserved. In fact, it is the best preserved cog ever discovered in Sweden. It consists of almost the entire port side of the ship, about 67 feet long and 16 feet wide, its ballast still in place. The second cog consists of the remains of a hull about 26 feet long and 15 feet wide. Examination of the vessels found that they were built with carvel planking (planks laid side to side creating a smooth surface) on the bottom and clinker built (overlapping planks) on the sides. The planks were sealed with moss and reinforced with crossbeams going all the way through to the exterior of the hull.

Dendrochronological analysis of the first timber samples from both ships has now been completed. The tree-ring analysis found that the wood from Varberg Cog 1 was felled in 1346 somewhere around the Netherlands, Belgium or northeastern France. The wood used to build Varberg Cog 2 was felled between 1355 and 1357 in northern Poland. This suggests they were not local ships, but had come from some distance. It is not yet clear what caused them to sink.

A number of daily use objects left by the crew were found in the excavation, preserved in the waterlogged soil of the shore. Archaeologists unearthed leather shoes, wooden utensils (spoons, bowls), barrel parts, and in Varberg Cog 1, they also found a significant amount of rigging, spare parts and other elements of the ships’ equipment.

The wrecks have been laser scanned and 3D models created of them. Study of the ships is ongoing and will continue through 2023.