Archaeologists have rediscovered a unique pre-Hispanic mural in Lambayeque, Peru, that was believed to have been destroyed by looters more than a century ago. 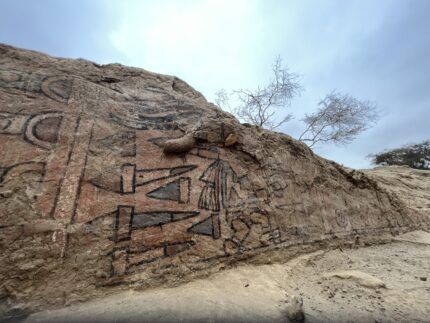 The mural was painted on the wall of a temple by the Lambayeque culture (900-1350 A.D.) a thousand or so years ago. A temple was known to exist at the site, but it was covered with dense foliage and had not been explored. At Easter in 1916, it was targeted by huaqueros, looters who dig up temples in Peru looking for saleable artifacts. At that time there was a “tradition” among huaqueros to celebrate Holy Week by sacking the temples of the “gentiles.” They didn’t come across any of the gold and silver artifacts they were hoping for in their looting tunnel, so they decided to just demolish a wall with a vividly colored mural they had exposed with their digging instead. They were stopped in the nick of time by authorities. 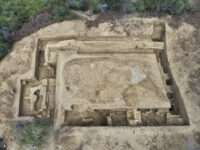 Ethnographer Heinrich Brüning, who took thousands of photos of Peruvian antiquities in the late 19th and early 20th centuries, lived in Lambayeque. When he heard of the new discovery, he photographed the mural and the temple, now dubbed Huaca Pintada after the mural. The thwarted looters decided to take their revenge and destroy the mural anyway. As far as anyone knew, the huaqueros had succeeded in their despicable aims and the only evidence of the mural remaining were Brüning’s pictures and field notebooks.

For a hundred years, those photos were all scholars had when studying the unique iconography of the Huaca Pintada mural. The temple is on private property and the owners did not allow excavations. The family had lived next to the huaca since the 19th century and considered it their duty to care for it. After the disaster with the looters, they were not keen to expose the ancient site any further. In 2018, Swiss archaeologist Sam Ghavami and his Peruvian colleague Christian Cancho managed to persuade the owner to allow them to perform the first archaeological excavation of Huaca Pintada. On October 11th of this year, the third season of digs, the team hit paydirt: a 100-foot wall painted in brilliant red, yellow, white, lucuma (an orangey yellow named after a Peruvian fruit), black, brown and blue.

It turns out the looters had only found a few panels of a far larger mural. It depicts a procession of warriors marching towards a deity with birdlike features. Above the procession is a river carrying fish to the valley. The style of the painting combines elements of the Lambayeque culture and its Moche (100-850 A.D.) ancestors, marking an important transitional phase in northern Peruvian art.

“It’s an exceptional discovery, first of all, because it is rare to unearth wall paintings of such quality in pre-Colombian archeology,” said Sam Ghavami, the Swiss archeologist who led excavations that uncovered the mural in October. […]

The painted images “appear to be inspired by the idea of a sacred hierarchy built around a cult of ancestors and their intimate links with the forces of nature,” said Ghavami. 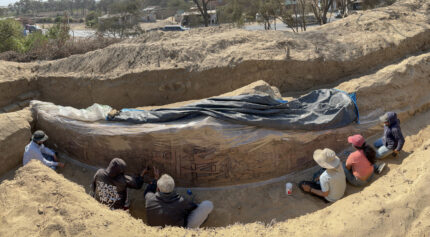 One thought on “Peru mural that evaded looters’ clutches rediscovered”