After centuries of speculation, Danish archaeologists think they have found the royal palace of 10th century king Harald Bluetooth, famed king, conqueror and Christianizer of Denmark and Norway. (Yes, the wireless technology invented by Swedish company Ericsson is named and logoed after him.)

Excavations in the Jelling complex in southern Jutland have uncovered the remains of 10th century wooden structures. Jelling is the site of several royal burial mounds and of rune-engraved monoliths, one of which is marked with an inscription from Harald dedicating it to Gormr, his father, and Thyrvé, mother. Gormr is considered the first king of Denmark.

Mads Dengsø Jessen, the archaeologist from Århus University who led the dig said four buildings from Harald’s time had been discovered at the site. The buildings are characteristic of those built at round fortresses known as Trelleborg.

‘This tells us that we have uncovered a large complex, and the strict geometrical construction is a typical example of Harald’s work,’ Jessen said.

Archaeologists have yet to identify the remains of Harald’s royal hall, but Jessen believes they can be found under the existing Jelling Church, where the remains of a large wooden building were discovered on a previous dig.

Archaeologists had speculated that the wooden building was a church but because of its location in relation to the newly uncovered longhouses, Dengsø Jessen thinks that it is almost certainly Harald Bluetooth’s royal hall.

The palisaded enclosure around these four buildings is huge. Archaeologists say that it’s six times the size of Amalienborg Palace, the 18th century royal palace complex in Copenhagen. 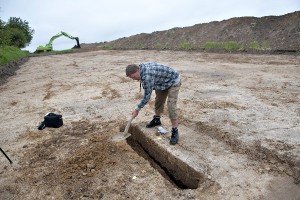