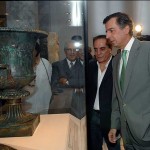 Now it’s Greece’s turn to get a little of its own back.

The upper part of a marble funerary stele and a bronze krater, or large cup, dated to the 5th and 4th century BCE, were returned by collector Shelby White in August under a deal in which Greece pledged not to legally pursue the matter, it said.

“The culture ministry recognises that the antiquities were acquired by Ms White in good faith, and for this reason…no demands will be raised against (her),” a ministry statement said.

But Greece reserves its legal rights over other potential claims regarding items in White’s collection, it added. 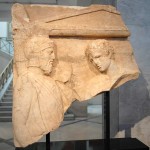 Good call, because odds are there are a lot more goodies where these two came from. The Italians did the same thing, btw: allow Shelby White to claim “good faith” so she won’t get prosecuted like Marion True, former curator of the Getty Museum and regular receiver of stolen goods.

It’s a fig leaf. White and Levy knew full well they were buying shady shit from shady people. They just looked the other way like the Getty and the Met did.