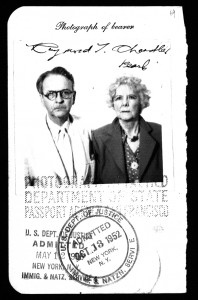 Raymond Chandler, author of classic hard-boiled detective novels like The Big Sleep and Double Indemnity, wasn’t hard-boiled in the least when it came to love. He was married to his wife Cissy for 30 apparently blissful years. She was 18 years older than he (she lied about her age to the end, so he thought she was only 8 years older) and when she died in 1954 after a long illness, he was completely devastated. He describes the devastation in a letter he wrote to his long-time friend and publisher Hamish Hamilton:

In a sense I had said goodbye to her long ago. In fact, many times during the past two years in the middle of the night I had realised that it was only a question of time until I lost her.

But that is not the same thing as having it happen. Saying goodbye to your loved one in your mind is not the same as closing her eyes and knowing they will never open again. Late at night when people have gone to bed and the house is still and it is difficult to read I hear light steps rustling on the carpet and I see a gentle smile hovering at the edge of the lamplight and I hear a voice calling me by a pet name.

I have a couple of very old friends staying with me, and they are patient and kind beyond expectation. But the horrors are all mine just the same. For 30 years, 10 months and four days, she was the light of my life, my whole ambition. Anything else I did was just the light for her to warm her hands at.

Depressed and despondent, within five years he had drunk himself to death. So rudderless was he during those five years of his widowerhood that he never made a will or even any arrangements for his own funeral, nor left any provisions for what to do with Cissy’s ashes.

When he died in 1959, his friends had him buried in Mount Hope Cemetery, a public cemetery east of downtown San Diego, a block away from neighboring Cypress View Cemetery that held Cissy’s ashes in its unclaimed vault. Without his specific instruction, Chandler’s mourners simply didn’t think to bury them together.

Chandler had written in letters about wanting to be buried next to her, though, a fact noted in one of his biographies. In 2009, Chandler fan and historian Loren Latker was leafing through the biography when he noticed a line at the end of the description of the author’s funeral: “No one thought to have Chandler buried with his wife’s remains . . . as he wished.” Latker decided then and there to see if he could remedy this sad oversight.

It took him 18 months of legal wrangling, but with the help of his wife Annie Thiel and lawyer Aissa Wayne (John Wayne’s daughter), Latker successfully petitioned the San Diego Superior Court to allow a reburial so Cissy’s ashes could be interred with her husband’s.

On Valentine’s Day of this year, Cissy and Raymond were buried together at last. A hundred people came to the funeral, many in period costume, some fans, some performers, even one personal friend of Chandler’s. Sybil Davis, the daughter of Chandler’s literary assistant, was 13 when Raymond died, and she considered him a grandfather figure. Chandler left Sybil’s mother Cissy’s diamond wedding ring, his monogrammed silver cigarette case and his ostrich wallet, all of which are now Sybil’s and all of which she brought to the funeral.

A cortege of vintage 1920s cars carried Cissy’s ashes to the burial ground while a jazz band played “When the Saints Go Marching In.” The officiant was the same priest who had buried Chandler in 1959. You can see pictures of the ceremony on this Flickr photostream.

Powers Boothe (star of the 80s series “Philip Marlowe Private Eye”) spoke. He read snippets from Chandler’s work, including “I was neat, clean shaved and sober, and I didn’t care who knew it…” and “If in doubt, have three guys come through the door with guns….” Boothe closed the service by channeling Chandler once more: “I’m not going to say goodbye. In the tradition of Raymond, I’m going to say, ‘I need a drink, and I’m going to have one.'” 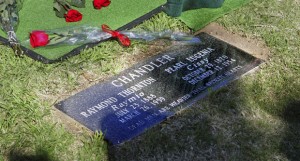