Archaeologists excavating near Nazca, Peru, have discovered a cluster of homes and graves that date back 5,500 years.

One of the project researchers said that the excavations made at the site since last October enabled the team to find the remains of eight small oval-shaped and circular homes made by digging deep pits in the ground.

Also found were up to 19 graves of children and adults interred individually inside the homes, which would seem to indicate that they were buried there after the homes were abandoned.

In some of the graves, archaeologists found carved bones and snail-shells, deer horns, necklaces and bracelets made from shells, but there was no concrete evidence of offerings to the dead or to dieties.

This is the first human remains found in Peru from the late archaic period. The circular plaza found last February dates to the same time, and it’s thought to be the oldest urban structure in the Americas.

There’s a large lacuna in Peruvian archaeology between prehistory and the 16th c. Inca civilization, so this find is a big step in filling in some of the blanks, as was the Wari mummy discovery earlier this year in Lima.

Fishermen trailing nets 15 miles off the Bulgarian coast of the Black Sea uncovered a wooden dugout canoe, most likely dating to prehistoric times.

Finding a wooden ship older than 300 years is pretty much unheard of anywhere but in the Black Sea. This one looks neat, too. Oak ages handsomely even under water for thousands of years. 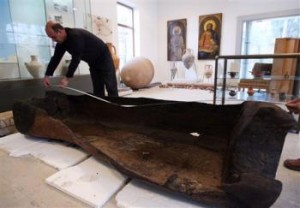 Slap a coat of poly on it and flip it upside down and you could sell it to Pier One as a coffee table.

Following in the hallowed footsteps of institutional receivers of stolen goods like the Getty and the Metropolitan, the Cleveland Museum of Art is returning 14 antiques to Italy.

The Cleveland Museum of Art has agreed to hand over 13 ancient artifacts and an early Renaissance cross to Italy after long negotiations, the museum and Italian officials announced here on Wednesday. […]

The processional cross, dating from around 1350, was not excavated but apparently was kept at a church near Siena, Italy, until the 1970s. The museum purchased it in 1977 from a German dealer, Cleveland officials said. […]

For the most part the objects claimed from the Cleveland museum — including a fourth-century B.C. Apulian volute krater by the so-called Darius Painter and a ninth-to-sixth-century B.C. bronze of a warrior from Sardinia — were acquired in the 1970s and 1980s. Several were donations.

It’s the usual deal. In exchange for getting the stuff back, the Italians promise not to prosecute any of the employees who had a hand in buying the stolen objects and loan equivalent pieces to fill in the blanks on the gallery floor.

There are still a couple of artifacts under negotiation: a winged victory from a 1st c. chariot, and a bronze Apollo thought to have been made by Praxiteles purchased from a pair of ubershady dealers with a long track record of falsifying provenance and laundering looted antiquities for major dealers like Robert Hecht, currently on trial in Italy for conspiracy to traffic in illegal antiquities.

David Gill has a complete list of all the antiquities the Cleveland Museum of Art is returning to Italy. 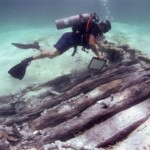 The slave trade was illegal on the British islands of Turks and Caicos in 1841, so when 192 Africans survived the wreck of the Trouvadore, they settled on the islands.

Many of the current population are descended from the survivors, which makes the find of the wreck particularly important.

The team was able to determine that authorities on the islands apprenticed the Africans to trades for a year and then allowed them to settle on the islands, many on Grand Turk. The Spanish crew was arrested and turned over to authorities in Cuba, then a Spanish colony.

An 1878 letter refers to the Trouvadore Africans as making up the pith — meaning an essential part — of the laboring population on the islands.

As important as this ship was to the history of Turks and Caicos, its existence was forgotten over time, until in 1993 researchers stumbled on that letter in the Smithsonian.

Two African idols, found on board the last Spanish slaver, of wood with glass eyes [schr “Esperenza”] wrecked in the year 1841 at Breezy Point on the Caicos Islands. The slaves from this vessel were taken possession of by the Government and brought to the Grand Turk Island. – The captain of the slaver, escaped the penalty, (by being a Spaniard), of being hung according to the British laws. The slaves were apprenticed for the space of one year and they and their descendants form at the present time, viz the year 1878 the pith of our present labouring population.

Many years of research ensued after the discovery of the letter, and in 2004 marine archaeologists set off to find the wreckage off the coast of East Caicos. When they located a likely wreck, they couldn’t find the name of the ship on any of the remnants.

The age and dimensions — carefully measured and compared to every ship known to have gone down in the area — of the wreck are what finally persuaded scholars that it is in fact the Trouvadore.

Way back when the earth was new and I first began to blog, I wrote this entry about a “potentially revolutionary find” of 3rd c. Christian and Basque language inscriptions.

Well, not only are the inscriptions modern fakes, but they’re so fake it’s embarrassing.

Now experts who have studied the pieces in depth say the fakes, some of which used modern glue, should have rung warning bells immediately. References were found to non-existent gods, 19th-century names and even to the 17th-century philosopher Descartes.

Words in Euskara used impossible spellings. The hieroglyphs included references to Queen Nefertiti which would have been almost impossible to make prior to the 19th century.

The Calvary scene, meanwhile, included the inscription “RIP”. “It is a formula that can only be applied to people who are dead,” Almagro told El Correo newspaper. “To say that Jesus Christ is dead would be a heresy. I haven’t seen anything quite so funny in the whole history of Christianity.”

The forger either had fragments of third century pottery which he buried on site, or he had access to the lab where the fragments were examined and planted the forgeries there.

I feel sheepish as hell just for having relayed the story. I can’t imagine what the archaeologists on site were thinking. I mean, dig director Eliseo Gil called the find on a par with Pompeii and Rome itself.

Dude, srlsy. You have a degree. I mean, Decartes? :facepalm: 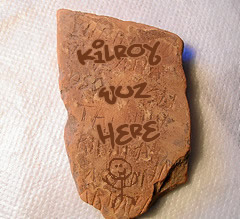