The latest find is an 1,800-year-old Thracian chariot uncovered in the village of Karanovo, south of Sofia.

The bronze-plated wooden chariot is decorated with scenes from Thracian mythology, including figures of a jumping panther and the carving of a mythological animal with the body of a panther and the tail of a dolphin, Ignatov said.

He said the chariot, with wheels measuring 1.2 meters (four feet) across, was found during excavations in a funerary mound that archaeologists believe was the grave of a wealthy Thracian aristocrat, as he was buried along with his belongings.

The team also unearthed well-preserved wooden and leather objects, some of which the archaeologists believe were horse harnesses. The remains of horses were uncovered nearby.

There are an estimated 10,000 Thracian tombs spread all over Bulgaria, but (surprise, surprise) looting has destroyed 90% of them. Until this August, the only chariots archaeologists found were in pieces because looters got to the site first.

Oh, and check this: Veselin Ignatov, the head of the Karanov dig, got a whopping $12,500 from the Bulgarian Culture Ministry for the entire excavation. :angry: 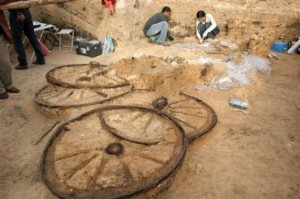