A Bronze short sword has been discovered in the bed of the River Váh near the town of Hlohovec in the southwestern Slovak Republic. The blade is 26 cm (10 inches) long and weighs 150 grams (5.3 oz) and had a handle made of organic material (probably wood) which has not survived. The rivets that once joined the handle to the sword are still in place, however. It dates to the 16th century B.C.

It was discovered by a local resident last summer when it was exposed by a sharp drop in the water level. At first he just thought it was a cool object and took it home. He soon realized it was an archaeological find and had it examined by an archaeologist at the local museum who confirmed its ancient age and reported it to the Trnava Office of the Monuments Board of the Slovak Republic.

These types of short-bladed swords or long-bladed daggers are typical of the Tumulus culture of the Middle Bronze Age in the Danube basin. They have been found in tombs, hoards and in rivers and other bodies of water, where they were deliberate depositions made for ritual purposes.

At the end of the Early Bronze Age the first metal swords began to appear in Central Europe, as a separate invention that most likely evolved from long bronze daggers. The sword from the Váh could serve as a very interesting developmental link between these two types of weapons, [Matúš] Sládok [of the the Trnava Office] argued.

The Monuments Board of the Slovak Republic is fairly new, established in 2002. In the twenty years since, four Bronze Age blades like this one have been found in the Váh and reported to the Trnava Office. 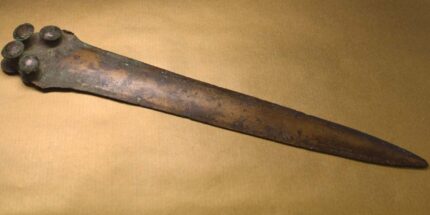