A mosaic composed of natural stones has been unearthed at the ancient Bronze Age Hittite site of Usakli Hoyuk near Yozgat in central Turkey. It was first discovered in 2018 in the remains of temple to Teshub, the Hittite god of thunder and storms. The temple dates to around 1500 B.C., which makes this mosaic the oldest patterned mosaic known.

The site has been known since the early 20th century, but it was first officially explored by archaeologists in 2008. The geophysical survey indicated the presence of a large building of Hittite origin. Excavations between 2013 and 2015 revealed a monumental temple with walls of roughly-hewn megalithic stone blocks built without mortar. Small but complete pieces of pottery — an unguent vase, a conical cup –typical of ones found at Late Bronze Age Hittite temples identified its purpose. 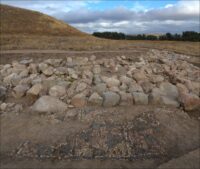 The mosaic pavement was located in a courtyard of the temple. It is ten feet wide and 23 feet long and today consists of 3,147 stones in shades of white, red and black. They are irregular in size were laid flat onto a beaten earth floor. The stones were placed in contrasting color arrangements creating geometric patterns.

Other Hittite-era paved floors and courtyards have been found at sites in Anatolia, but they were paved with flagstones or compacted pebbles, not deliberately arranged to form geometric designs of different colors. The Usakli Hoyuk floor is unique both in the size of the medium size of the stones (neither large flagstone nor small pebble) and in their careful selection and installation based on shape and color. 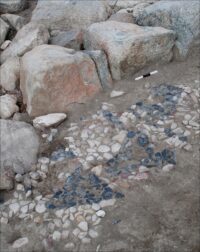 Before this discovery, the oldest mosaic floor was considered to be a Mycenean-era pavement in the palace of Tiryns in Greece, also from the mid-2nd millennium B.C., but its pebbles are not multi-colored and there are no unmistakable patterns. It’s in the Iron Age that pebbles of different colors, the forerunners of tesserae, were used to create geometric and abstract designs. The pavement in the temple at Usakli Hoyuk is something of a missing link between the flagstones and the colorful pebbles.