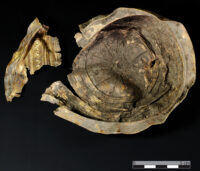 An extremely rare gold bowl decorated with a sun motif that dates back at least 3,000 years has been discovered at the site of a prehistoric settlement in Ebreichsdorf, Austria. There are only about 30 of these finely worked Bronze Age gold bowls known in Europe, and this is the first of its kind discovered in Austria; the second east of the Alps. Most of them come from northern Germany and Scandinavia, with single examples found in Spain, France and Switzerland.

The bowl is two inches high and eight inches in diameter. It is made of a thin sheet of gold finely decorated in repoussé technique (hammered on the

back of the sheet to form a raised design on the front). The side of the bowl has rows of concentric circles, lozenges and dots. The bottom of the bowl is decorated with a radiating sun. It contained four other precious objects: two bracelets of spiral wire and two clumps of organic material wrapped in gold wire. The material was either leather or fabric stitched with gold.

The site has been excavated since September 2019 to salvage archaeological material before construction of a railway station. The digs revealed a Late Bronze Age settlement of the Urnfield culture (named for their practice of burying urns containing the cinerary remains of the dead in fields). Occupied between around 1300 and 1000 B.C., the settlement consisted of several pile dwellings built around a large central building. It covered an estimated area of about 25 acres and was home to a community of about 100-150 people. The bowl was found buried against the side of one of the pile dwellings. 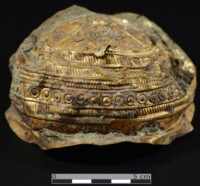 The bowl and its contents may have been a votive deposit. The southern edge of the settlement was bounded by a seasonal waterway, a stream or swamp, and archaeologists found almost 500 bronze objects including pins, knives complete with handles, and daggers in the watercourse layer. They also found animal bones and ceramics. There is almost no damage to the finds, so they weren’t thrown out as trash, and the watercourse was too shallow to be navigable so they weren’t accidental losses. The density and distribution of the finds indicate they were deliberately deposited over time.  Archaeologists believe this was a site of ritual importance where objects and animals were thrown in the water for religious purposes.

The bowl is being cleaned and conserved and will go on display at the Kunsthistorisches Museum in Vienna. Meanwhile, it has been digitally scanned and a 3D model created: