The oldest surviving manuscript in the Cornish language and the earliest book known to have been in Cornwall have gone on display in Cornwall for the first time. Pascon Agan Arluth and the Bodmin Gospels, on loan from the British Library, are the star attractions at the Treasures from Medieval Cornwall exhibition at Kresen Kernow, the archive center that holds historical, archaeological and photographic records relating to Cornwall’s history, in Redruth.

The Bodmin Gospels and the Cornish poem the Pascon Agan Arluth (meaning “The Passion of our Lord”) are on loan from the British Library for this special exhibition. The Bodmin Gospels is the earliest book whose presence in Cornwall is documented on the historical record. It was written in Brittany in the late 9th century but by the 940s it was in Cornwall at the priory of St. Petroc.

For the next 150 years, clerics recorded the manumission of enslaved people in the margins and blank pages of the Gospel. The names of 129 freed slaves are listed in the manuscript, 84% of whom had Cornish names. The vast majority of the 34 former slave owners listed had English names. The Bodmin Gospels is therefore of great historical significance both for its age, its early presence in Cornwall and as the sole surviving source of the names of these formerly enslaved individuals, their masters and the witnesses to the manumission. It is a unique record of early medieval Cornwall, both its literate and landed elite and its ordinary people.

The loaned treasures are joined by important documents already in the Kresen Kernow’s archives, including a handsomely illustrated medieval calendar and the cartulary of Glasney College, a 15th century register of the history, regulations, grants, taxes, rents and canons of the most important religious center in Cornwall. It was the center of Cornish language scholarship from its founding in the 13th century until its destruction in the dissolution of the monasteries in 1548.

Built in the historic Redruth Brewery site, the new state-of-the-art center houses more than 1.5 million manuscripts, books, newspapers, maps and photographs from the Cornwall Record Office, the Cornish Studies Library and the Historic Environment Record. Treasures from Medieval Cornwall runs through January 22nd, 2022. The Kresen Kernow ‘s Treasure Gallery where the manuscripts are being exhibited is small. Only six people will be allowed in a time, so it’s best to book tickets in advance. 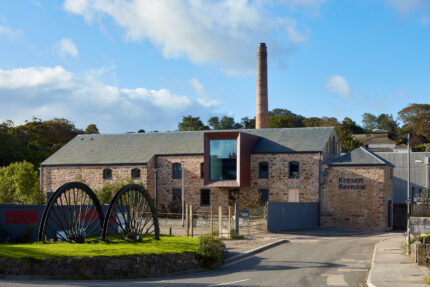