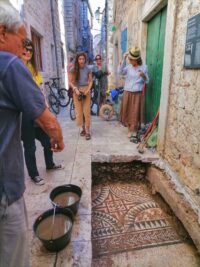 A Roman mosaic has been revealed under a narrow street in the Old Town of the Adriatic island of Hvar, Croatia. The elaborate geometric mosaic floor dates to the 2nd century A.D. and was part of a luxurious Roman villa urbana.

The street is being excavated prior to water and sewage work, but this is the second bite at the apple. In 1923, the site was opened to build a canal for rainwater drainage and the remains of the villa were discovered two feet below street level. The finds were eventually covered with slabs and reburied to protect them from water penetration.

The installation of the water drainage system was not completed after the 1923 excavation and increasing problems with penetration from ambient moisture and rising sea levels threaten the survival of the ancient remains of Roman Pharia in Hvar’s historic Old Town. Residents would like to see the mosaic remain in situ, covered with plexiglass so it can be protected and enjoyed at the same time, but the sea has risen by a foot and a half since the mosaic was created and the street is no longer dry land. The new water pipe installation is still happening too, and they will be just a few inches above the mosaic. 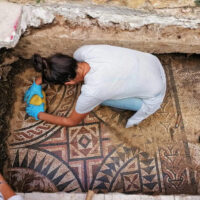 Archaeologists are currently excavating 14 other spots next to the mosaic site, looking for other remains from the villa urbana, other mosaics and any archaeological evidence that might identify the structure, or at least define it as a public or private building. When excavations are complete, officials will have a better idea of what steps to take next.

Right now the plan proposed by the archaeologists of the Museum of the Old Town is to raise the mosaic and transport it to the museum for long-term conservation and eventual display. They’ll replace it with a replica that can be walked on without damage. That proposed solution has to be approved by conservators and heritage officials from Split.

2 thoughts on “Roman mosaic found under street in Hvar”