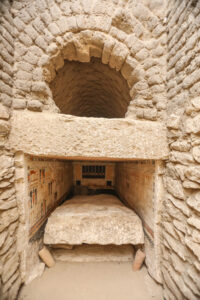 Archaeologists have discovered five tombs of senior officials in pharaonic administrations from the Old Kingdom and First Intermediate period in the necropolis of Saqqara, 15 miles southwest of Cairo. The walls are covered in paintings of high quality in excellent condition, the colors still vivid after 4,000 years.

The tombs were found earlier this month by the pyramid of Merenre Nemtyemsaf I (built ca. 2490 B.C.). They are hard to reach — reporters had to be lowered into the deep burial shaft with a rope

on a winch — which has helped preserve them. The walls are painted with images of sacred animals, ritual materials like the seven sacred oils, food offerings and  hieroglyphic inscriptions.

[T]he first tomb comprises a deep burial shaft and a chamber decorated with images that included altars and a depiction of the palace, as well as a sarcophagus carved from limestone.

Researchers believe they have matched the second tomb to the wife of a man named Yaret.

The third tomb is believed to have been the resting place of Pepi Nefhany, who served as a priest and supervisor, while the fourth tomb held the grave of a female priest of Hathor named Petty.

The fifth tomb was built for Henu, who researchers say served as an overseer and supervisor of the royal house.

Petty was also a royal stylist. Inscriptions record that she was responsible for the pharaoh’s beauty regime.

Inside the tombs archaeologists found more than 20 sarcophaguses all together, plus numerous figurines, wooden boats, ceramics, masks and other artifacts. Excavations of the tombs are ongoing, and Mostafa Waziri, secretary-general of the Supreme Council of Antiquities, believes more tombs from this period will be found at the site.

This video features footage of the interior of the tomb, and, entertainingly, the winching of journalists.

One thought on “Five tombs of pharaonic officials found”