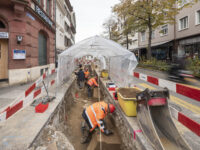 Infrastructure work around the Wettsteinplatz district of Basel, Switzerland, has unearthed the richly-furnished 6th century grave of a 12-year-old girl. Since work began in 2021, the remains of several early medieval graves have been discovered, but they had been badly damaged by earlier construction and only a few bones could be retrieved. The little girl’s grave, on the other hand, was well-preserved and replete with grave goods including an iron purse clasp, an iron belt buckle with inlaid stripes of gold and many, many beads. 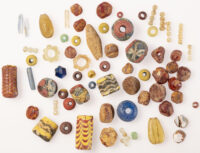 When the archaeological team realized there were artifacts in the burial, they removed the entire grave in a soil block so it could be excavated in laboratory conditions and without time pressure from the construction schedule. The excavation revealed a dizzying array of glass and amber beads, more than 350 of them in total.

Not only is the large number extraordinary, but also the fascinating variety of types, shapes and colors. Segment beads with inlaid gold and silver foil, for example, testify to a particularly high level of craftsmanship. It can be assumed that the beads were not placed in the tomb individually, but may have belonged to a complex beaded collar or once formed several necklaces. It is also conceivable that individual beads were sewn onto the robe or an enclosed bag.

The 6th century was a busy time for Basel. It had been conquered in the early 5th century by the invading Germanic confederation of the Alemanni, and a century later the Franks took over, but both Alemanni and Frankish settlers prospered in Basel. The city grew in population and influence from that point, overtaking the former Roman provincial capital of Augusta Raurica 12 miles to the west in the 7th century.

There are no written records surviving from this period in Basel’s history, and very little archaeological material, so this one girl’s grave is of oversized significance because of its density of artifacts. There are indications that there are additional graves near the ones that have already been found, so archaeologists hope to uncover more remains as excavations continue to shed new light on the development of early medieval Basel.