The Treasure of Garonne, an assemblage of 4001 Roman coins that went down with a shipwreck in the 2nd century A.D., has gone on display at the Museum of Aquitaine Bordeux. This is the first time all 4001 coins have been exhibited to the public. The coins are sestertii made of orichalcum, a brass-like alloy of zinc and copper, ranging in date from the reign of the Emperor Claudius (41-54 A.D.) to that of Antoninus Pius (138-161 A.D.). It is the largest and most significant Roman coin treasure in France. 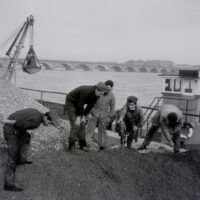 The first coins from the treasure were discovered accidentally in 1965 during dredging works on the Garonne river. Former University of Bordeaux professor Robert Étienne recognized that there were likely more coins to be found and organized a series of systematic excavations at several sites on the river over the next six years. Coins have continued to turn up in the decades since, donated by individuals and institutions, some even found at private construction sites trapped in sand from the Garonne that was being used as aggregate. One of the museum’s conservators found a coin when he was a child and he donated it so it could join its brethren in the comprehensive exhibition. The most recent donation of an orichalcum coin from the Treasure of the Garonne was just last month. 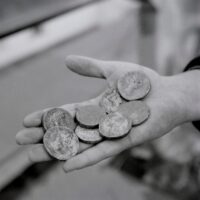 Charred pieces of wood found in the initial discovery indicate the coins were on a merchant ship traveling upriver from Burdigala (modern-day Bordeaux) between 170 and 176 A.D. The vessel caught fire and sank with its cargo, including thousands of orichalcum sestertii, many of which were visibly altered by contact with the fire. Estimates based on the ship’s cargo size suggest as many as 800 coins are still unaccounted for, snapped up by souvenir hunters during the initial find, embedded in the sediment still on the river bed or inadvertently built into random walls.

Recording and studying the massive number of coins has taken decades, which is why the complete treasure has never been on display until now. The coins have been invaluable in answering questions about the composition of orichalcum, particularly its zinc content and how it changed from the first century to the end of the second. 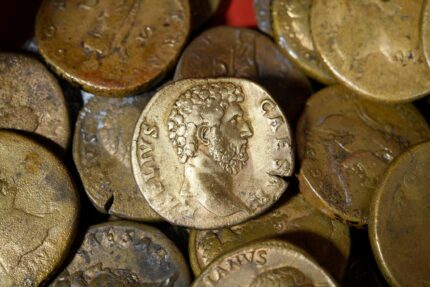