An archaeological survey of a real estate development in Changsha, Hunan Province, China, has unearthed 21 tombs from the Western Han Dynasty (202 B.C.- 9 A.D.) More than 234 groupings of grave goods have been discovered in the tombs since excavations began in October.

The 21 tombs are small vertical pit tombs of two types: convex ones with passages and rectangular ones with no passages. Several of them are paired tombs or lined up in rows of three or four. The paired tombs placed side-by-side in the same orientation are believed to be spouse or family burials.

Tomb M12 is unusual in that it contains the surviving elements of the outer coffin that is shaped like a Roman number II. The traces of five pillars, now decomposed, run down the middle of the floor of the tomb. The pillars probably supported a second floor, which would make M12 an extremely rare double-layer tomb. Han Dynasty tombs with double layers have been found before in other cities — Guangdong, Guangxi, Sichuan, Hubei — but this is the first one found in Changsha.

Most of the grave goods found in the tombs were earthenware and pottery in a variety of different forms. M12 also contained two pieces of ironware and a talc disc with a kite and dotted circle pattern known as a “bi.”

During the Han Dynasty, the city of Changsha was known as Linxiang and was the capital of the Changsha Kingdom, a vassal state of the Han Empire. Important Western Han-era tombs have been discovered before in Changsha, most notably the paired tombs of Liu Sheng, known as prince of Zhongshan, who was the son of Emperor Jing of Han and brother of Emperor Wu of Han, and his wife Dou Wan. This was the first intact Western Han tomb ever discovered and it was incredibly rich, containing more than 2,700 precious artifacts and complete jade burial suits worn by both Sheng and Wan. 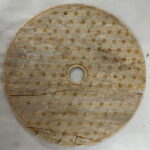 After finding out the assemblage of 21 tombs, that are all of the same age, the archaeologists concluded they possible belonged to “a royal family buried together in an ancient mausoleum”. […]

It is thought that “couple burials” emerged as the usual type of royal burial in the course of the late Han interval, together with the pairing of male/feminine motifs in the styling of the tombs. This is why the archaeologists level in the direction of their discovery of a uncommon “paired tomb” because the smoking gun for this being the burial website of a Han “royal” household.