The bronze sculpture of a deity with human head on snake body found in Pit No. 8 of the Sanxingdui Bronze Age archaeological site has been reunited with its missing upside-down bird’s leg 3,000 years after their separation. The bronze statue was just unearthed in June; the bird-legged sculpture was discovered in Pit No. 2 in 1986.

The bronze statue was cast in three parts — a urn base, the central section with the tusked anthropomorphic head on a snake body, a trumpet-shaped

drinking vessel — that were then welded together. The three sections combined into a dramatic sculpture more than five feet high representing mythological figures and iconography of the Bronze Age Shu kingdom.

The bronze bird-footed statue is clearly incomplete, the legs of a creature wearing a snug skirt with a cloud pattern from which shapely legs emerge with feet that look like bird claws. The claws clutch the heads

of two long-necked birds. It has been on display at the Sanxingdui Museum for years with the tantalizing notice: “The bird’s foot portrait is probably the most bizarre one. It is a pity that such an exquisite artifact is missing the upper half, what does it really look like? It’s really baffling.”

Well it turns out it’s actually missing its rear half, because the “waist” of the skirt is a perfect fit for a curved appendage on the back of the recently-discovered statue, and it has been displayed upside-down this whole time.

“The successful matching of cultural relics from different pits has confirmed archaeologists’ previous speculation. It also is of great significance for the subsequent restoration of cultural relics at the site. We expect that more bronzeware here can be rejoined together,” said Ran Honglin, an official with Sichuan Provincial Cultural Relics and Archaeology Research Institute.

The combination of the two parts also indicates that the two pits were formed at the same time, and the bronzeware was separated before burial. This is of great value for understanding the chronological relationship of each sacrificial pit, the reasons for the destruction of the cultural relics, and the social background at that time, Ran added. 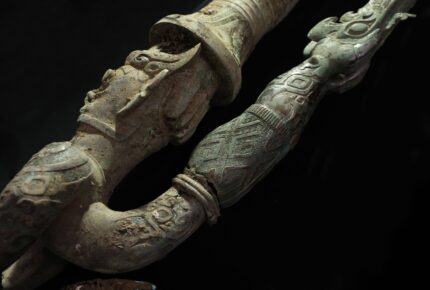